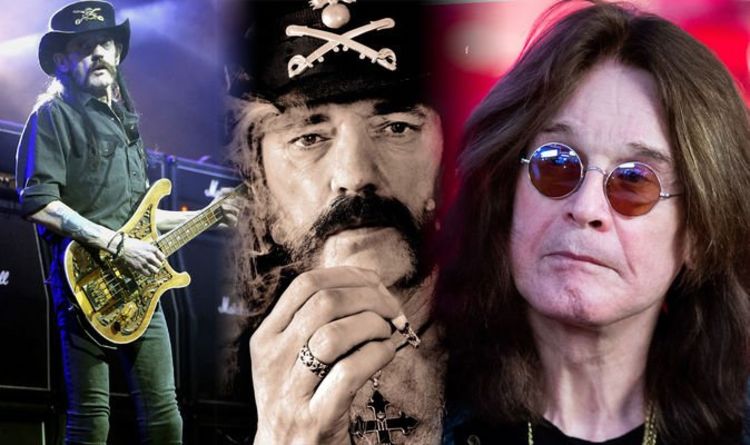 Lemmy Kilmister died of prostate cancer, cardiac arrhythmia and congestive heart failure on December 28, 2015, just days after his 70th birthday. In a newly unearthed, poignant interview, his friend and fellow rocker Ozzy Osbourne shared his memories of the last day of Lemmy’s life.

Speaking to Metal Hammer last year, Ozzy said he had called the Motörhead star the day he died, saying: “I knew he was dying.

“He didn’t even know it was me,” the former Black Sabbath icon recalled. “I had to say to him, ‘It’s Ozzy, Lem.’

Ozzy told the publication he and his wife Sharon Osbourne were going to rush to be with Lemmy but it was too late.

Lemmy suffered with a number of serious health issues in the years prior to his death and was hospitalised with a lung infection months before he died.

Ozzy also spoke out about Lemmy’s funeral, which was held in January 2016, and attended by Lars Ulrich, Dave Grohl and Slash, among others.

“His memorial was something else,” he said. “I thought to myself, Jesus, if he was looking down at this shower!

“There was a tray of drinks as you went into the church. I thought, this is Lemmy alright!”

Motörhead supported Ozzy on his first US tour many years ago and, paying tribute to Lemmy, the singer called it a memory he will “take to his grave”.

“Good times, they were all good guys,” he said. “I miss them all, to be honest.”

RIP Lemmy: Loud and proud to the end [OBITUARY]

Following Lemmy’s death, Ozzy shared a touching tribute in which he wrote: “He lived the rock & roll lifestyle to the max, but it’s still sad when you lose a friend like that.”

Ozzy added: “There goes a hero for me. He was my hero. He was f***ing great, a good friend. I’m missing him already. I’l never forget him.”

Lemmy’s manager Todd Singerman told Sky News at the time: “Nobody had any idea, we just learned Saturday, two days ago, that he even had cancer and the doctor told him he had between two to six months to live.

“He died today as I was making calls to his bandmates Phil Campbell and Mikkey Dee, telling them to come out so they could have a last goodbye while he was still upbeat and everything.