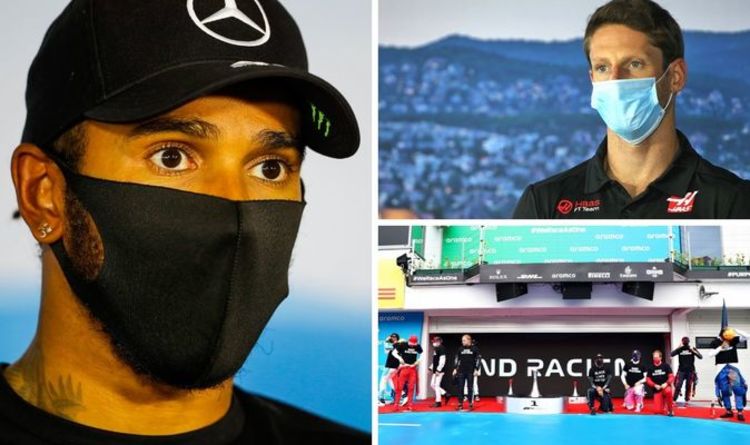 Lewis Hamilton admits he’s facing a “battle” to convince his F1 rivals to take a knee in a show of unity behind the fight against racism and discrimination. The Mercedes driver has made the gesture before the first three Grands Prix of the 2020 F1 season.

Most of his rivals have joined him in doing so, but there remain outliers who have opted against taking a knee pre-race.

The stand against inequality prior to Sunday’s Hungarian Grand Prix was rushed and that came a week on from TV coverage of the gesture being cut short to show footage of parachutists at the Styrian Grand Prix.

Following his victory at the Hungaroring, Hamilton pointed the finger at Haas driver and Grand Prix Drivers’ Association (GPDA) director Romain Grosjean, who he says has downplayed the importance of taking a knee.

The six-time champion also called out F1 bosses, who he believes must do more to give the fight against racism a better platform after they launched their We Race As One initiative at the Austrian Grand Prix.

“[Grosjean] doesn’t think it’s important to do it,” Hamilton told Sky Sports F1. “[Grosjean is] one of them that thinks that it was done once and that’s all we need to do. I tried to speak to [Grosjean] about what the problem is and it’s not going away.

“We have to continue to fight for it. I think this time [Grosjean] didn’t mention anything in the drivers’ briefing and neither did [F1 driver and GPDA director] Sebastian [Vettel]. Sebastian and I message each other and he stressed, as did I, the importance that we continue to do it.

“I think, moving forwards, we need to speak with Formula 1. They’ve got to do a better job. It was such a rush. Us getting out of the car, running over, quickly taking a knee… they need to do more.

“I don’t know why they’ve only done it for the first race, at the start. They’ve not done it since then. They’ve come out saying they’re going to be fighting for diversity and to end racism, but they’re not giving us the platform to continue that. It’s all rushed.

Why Max Verstappen will not be taking a knee

“So I think they can give us more time. So if we speak to them. I’ll probably send an email over the next couple of days and try and co-ordinate with them. Because they do want to do it, it’s just I guess there was not good enough communication.”

Hamilton revealed after the Styrian Grand Prix he had held one-to-one talks on Zoom with the F1 drivers opposed to taking a knee.

And he says he still dreams of a collective show of solidarity, even if he admits he’s contending with an uphill struggle to talk them round.

“With the other drivers, there’s not a lot I could do,” Hamilton said. “I gave a lot of energy in Austria to try and convince a couple of the drivers. It’s a battle.