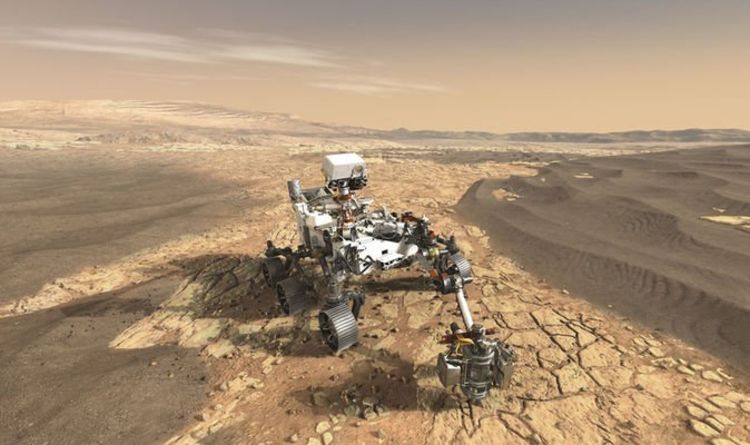 NASA is readying another rover to Mars to search for signs of alien life. The new Mars mission is the most ambitious yet as it will be the first space mission to return samples from the Red Planet to Earth.

A similar size to a compact car, the 2020 rover closely resembles the NASA Curiosity rover currently exploring the Red Planet because it is mostly made of spare parts.

The as-yet-unnamed Mars rover mission is the product of five years of meticulous preparation.

In addition to learning more about Earth’s nearest neighbour, the Mars rover will also continue the search for alien life and testing conditions for future human exploration.

The destination is Mars’ Jezero Crater, which once hosted a 30 mile-wide lake and contains the best possibility for life on another planet this close to Earth.

Dr Ken Herkenhoff, a scientist at the US Geological Survey’s (USGS) Astrogeology Science Center, helped create cameras that will provide a 3D view of what the rover sees,

The scientist described Jezero as a promising landing site.

Dr Herkenhoff said: “There’s a lot of craters on Mars and this one looks different from a lot of those craters because it has the delta so we can tell that there was once a river flowing into this lake and then there’s also a channel on the opposite side of the crater where the water drained out.

“It was filled to capacity and actually overflowed.”

Jim Bell, a professor at Arizona State University’s School of Earth and Space Exploration, is the principal investigator on the project.

He believes the main purpose of the NASA Mars 2020 mission is to better understand the planet but there is hope they hope the rover will spot signs of life.

He said: “We’re looking for the same kinds of things geologists are looking for out on a field sight on Earth where they’re trying to put together both the history of the geology at that place and possibly the history of biology or whether it was an environment that could have supported biology.”

A few minerals on Mars are particularly good at trapping past forms of life, known as biosignatures.