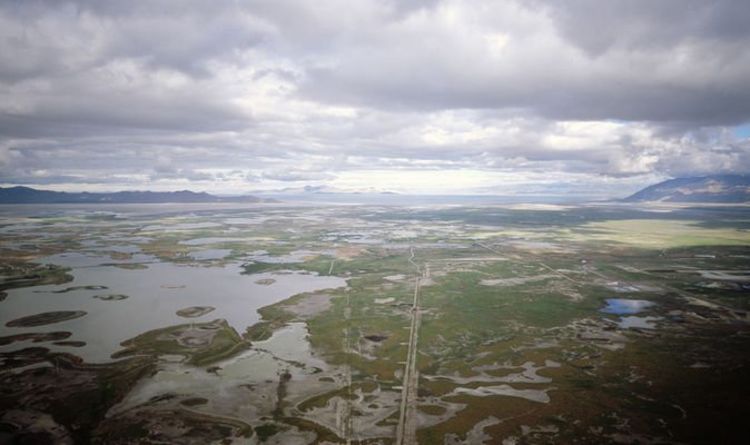 Last October, life seemingly emerged from the lake’s depths, with the emergence of salty, sulfate crystals. The mineral’s official name is ‘mirabilite’.

And it is that may help us understand if there truly is life on Mars.

“Mirabilite precipitates in the lake water, and it sort of gets washed ashore.

“You [usually] get these windrows of mirabilite. It can look … like a slushie or something.”

Elliot Jagniecki, a geochemist with the Utah Geological Survey, meanwhile, said via Atlas Obscura: “If there [are] sulphates on Mars, and there’s groundwater, what’s … fascinating and intriguing is the possibility that it could preserve life.

“Things are entombed in the crystal … A tomb of bacteria.”

It comes as experts believe freshwater lakes could impact on climate change.

READ MORE: US vows to crackdown on EU’s climate change policy – ‘We will react’

Dr Andrew Tanentzap in Cambridge’s Department of Plant Sciences, said via the Express: “What we’ve traditionally called ‘carbon’ in freshwater turns out to be a super-diverse mixture of different carbon-based organic molecules.

“We’ve been measuring ‘carbon’ in freshwater as a proxy for everything from water quality to the productivity of freshwater ecosystems.

“Now we’ve realised that it’s the diversity of this invisible world of organic molecules that’s important.”

“Climate change will increase forest cover and change species composition, resulting in a greater variety of leaves and plant litter falling into waterways.

And what they found out could be huge in knowing about climate change.

“We found that the resulting increase in the diversity of organic molecules in the water leads to higher greenhouse gas concentrations.

“Understanding these connections means we could look at ways to reduce carbon emissions in the future, for example by changing land management practices.”

ByAria Bendix, Business Insider As doctors observe a growing number of coronavirus patients, they have identified a few patterns in how typical symptoms progress. As many...
Read more