Life on Pluto? How scientists spotted 'something moving' across icy plains in NASA snap 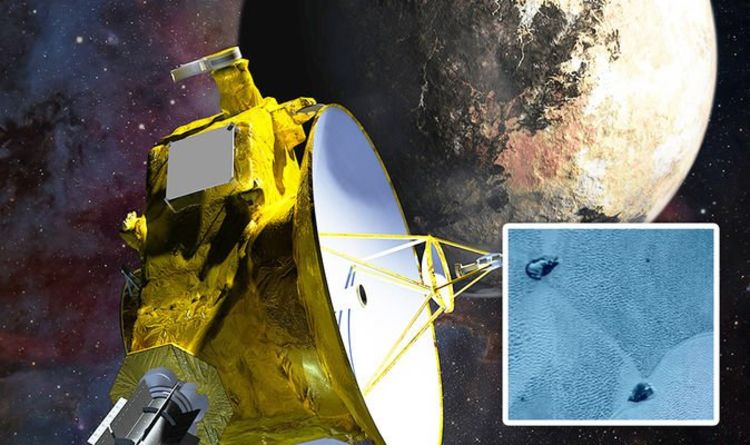 The image was captured by the space agency’s New Horizons probe, first launched in 2006 as part of the New Frontiers programme. On July 14, 2015, it flew just 7,800 miles above the surface of Pluto, making it the first spacecraft to explore the dwarf planet, sending back scores of snaps. The Discovery Channel’s “NASA’s Unexplained Files” revealed how they sent the scientific community into a frenzy.

Astronomer and image analyst Marc D’Antonio said in 2016: “New Horizons has shown us a Pluto we have never seen before.

“Unprecedented images, including this one, which actually looks like a snail.

“You can see what looks like a shell and a head, it’s really strange.

“I have to admit, it looks like it is leaving a path, it is a space snail?”

However, American astronomer Seth Shostak explained why such a find would break the laws of science.

He added: “The surface of Pluto is a horrible place for life, an impossible place.

“Let’s put it this way, everything in your body would freeze in a few seconds.

“You’d have to have a skeleton in it otherwise it’s just going to collapse in a heap.”

There may be a more reasonable explanation, the documentary explained.

“Pluto is, in fact, a geological world. “

Scientists at NASA believe nitrogen is pushed to the surface over thousands of years but because water ice is less dense than the frozen nitrogen huge icebergs are formed floating on the nitrogen.

Mr D’Antonio explained: “Think of a lava lamp, with a blob slowly coming up from the bottom of the lamp.

“This is exactly the same thing that is happening on Pluto.