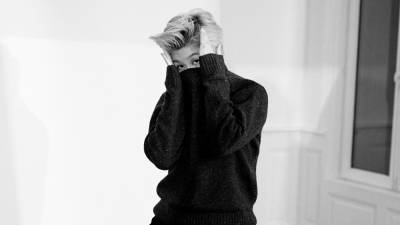 THE Parisian je ne sais quoi strikes a chord with Michele Yong, so much so that she made France her home for a decade, developing an impressive collection of work.

She says: “The most exciting part about photoshoots is working with a team that is completely on the same wavelength, and to create great work together with a single vision. Everybody plays an important role in creating the big picture and the result of that teamwork is much more satisfying than just solo work.”

Interestingly, Paris as a location did not overtly influence her work.

“It’s definitely an inspiring city to be in but other than that, I’m not sure how it has directly influenced my work. I don’t think it’s so much about the location as it is the people.

“North America has never appealed to me, and London was too much within my comfort zone, I wanted a different kind of challenge and to learn a new language. Paris just seems to be the most obvious choice as the capital of high fashion and photography.”

The City of Light is flourishing with a burgeoning pool of photographers, designers, stylists, models and artists from all over the world, with very different visions.

She shares: “The creative arts and fashion scene in Asia has been getting a lot more exciting than Europe these days. France is really lacking in terms of modernity and innovation; its complicated bureaucracy also makes everything extremely complicated and incredibly ineffective, making it difficult for individuals or small brands to grow and find exposure.”

As Yong herself is undergoing a thorough overhaul of her true artistic practice, she feels as though she is at a crossroads.

“I felt so done with Paris every single day for the past four years, maybe being here for so long has made me lazier and less ambitious.

“I can’t pinpoint my inspirations, and even find it challenging to keep my work fresh. Sometimes when I’m overwhelmed or experiencing a creative block, I try to take a break from anything related to fashion or photography, and then come back with new ideas.”

Her body of work has evolved through a variety of photographic styles and most recently formed a whole new aesthetic.

“Good taste is extremely subjective, and artists should be free to express themselves however they wish, regardless of what is deemed ‘good’ or ‘bad’,” Yong shares.

She calls it “The Final Chapter” – a momentous point of crucial importance in her career trajectory that she is currently undergoing, changing things up in a bid for a new photographic direction.

“I just got so incredibly sick of homogenous beauty standards, especially after 12 years in the fashion industry, and craved a fresh dose of subversive humour.

“It’s definitely a risky move to make because it isn’t something most people would appreciate, but as I intend this to be my last phase of a thorough overhaul, there really couldn’t be a more logical time for me to make such an imperative change and not regret my decision.”

For her, the unusual images that characterise her latest photoshoots are a rebellion against the ideas of absolute beauty and perfection that seem overrated.

“I’m attracted to work that highlights the opposite of that,” she asserts. Though her intention may be far beyond eliciting feelings of contempt, Yong’s gratifying endeavour to make otherwise ugly, weird and playful pictures look attractive can also be somewhat deeply stirring, and potentially evocative.

She shares: “I enjoy seeing the way a designer reinforces their identity through the images they create, regardless of the clothes.”

Some leading fashion brands have also appeared to embrace a less formal image, whether in their design or how they present themselves to consumers.

For example, some people have accused once-revered fashion house Balenciaga of having lost its collective mind after it turned its official Instagram account into a meme page by filling it with ridiculous images and videos.

“I like that there’s an outlandish sense of humour and a certain level of ‘poor taste’, it’s very refreshing and terribly necessary in an industry where people have taken themselves too seriously.”

While she is still on a quest to redefine new codes of aesthetics, Yong is taking one final round to explore new photographic expressions in her work.