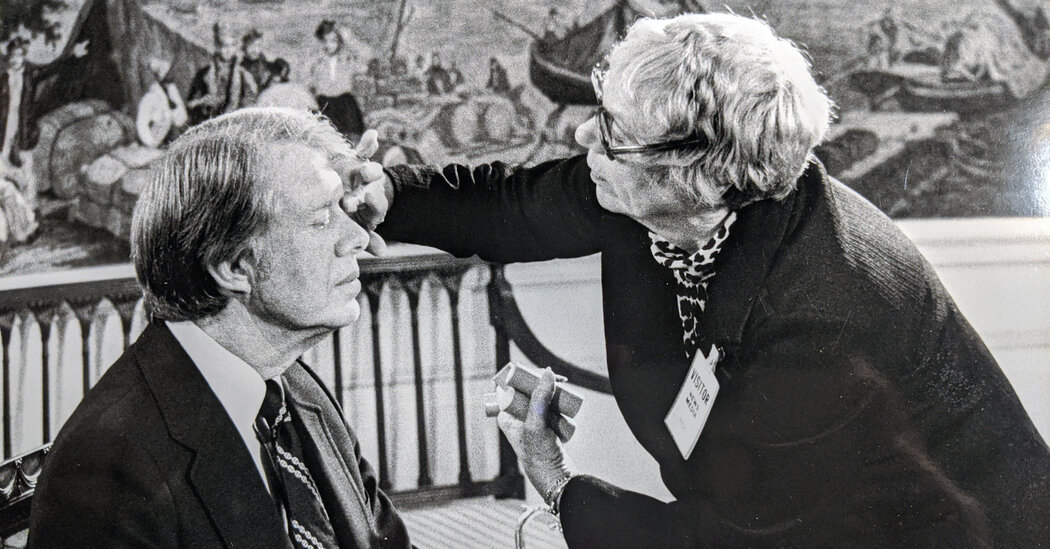 On Aug. 8, 1974, Lillian Brown, a longtime makeup artist for presidents, was urgently summoned to the White House, where she saw President Richard M. Nixon sobbing. Engulfed by the Watergate scandal, he was about to go on national television and announce that he was resigning. If he didn’t stop crying, she knew, his makeup would streak down his face.

“He was in bad shape,” Ms. Brown recalled years later. “We had six minutes to air, and I thought, What can I do for this man?”

She tried humor. She reminded him of the time one Christmas when his Irish setter, King Timahoe, kept bumping into the tree and destroying the ornaments. To get the dog away from the tree, Ms. Brown took him into a bathroom, and somehow, as if scripted by the Marx Brothers, she, the dog and Nixon all ended up locked in the loo by the Secret Service.

Nixon burst into laughter. With no time to spare, Ms. Brown made him presentable, and he went before the cameras.

Long before there were high-priced media consultants coaching the political elite, there was Lillian Brown, a common-sense farm girl from Ohio. She applied makeup for nine presidents, from Dwight D. Eisenhower to Bill Clinton. But she did much more than powder noses. She advised on diction, apparel and camera angles.

And long before there was Room Rater, the Twitter account that has been commenting on the backgrounds of Zoom calls since the Covid-19 pandemic struck, Ms. Brown moved flower vases to strategic positions within a TV frame, underlined important words on teleprompter copy and helped calm nerves before big moments.

She was not a cosmetologist, but she understood presentation.

“I didn’t know anything about makeup,” Ms. Brown said in a 2010 interview at the National Press Club in Washington. “But I could look at the monitor and look at the person and know what had to be done. I just went to the drugstore and bought anything I needed.”

Ms. Brown, who had a lifetime of glimpses behind the scenes at 1600 Pennsylvania Avenue, died on Sept. 13 at her home in McLean, Va. She was 106. Her daughter the Rev. Carla Brown Gorrell said the cause was a stroke.

Ms. Brown came by her role as all-around adviser and image consultant by accident. She happened to attend the same church as Eisenhower in the 1950s, and this started her thinking about presidents and their churches. She created a television series on the subject.

That led to her becoming the host of a local public-service television show, which shared a studio with the CBS News program “Face the Nation.” One day a CBS producer, who noticed that Ms. Brown was putting makeup on her guests, even the men, came over to her and said, “Your people look wonderful and mine look terrible.” He hired her to make up his guests at $ 19 per session.

Her first customer for “Face the Nation” was the speaker of the House, Sam Rayburn. He thought makeup was for sissies, but the producers worried that his bald head would shine under the lights. They told Ms. Brown that she had to persuade him to let her work her magic.

She thought about it for a while, she recalled in a 2009 speech in Washington, then said to him, “Mr. Sam, if you let me powder your nose, I will not relieve you of your manhood.” Rayburn guffawed.

She worked in makeup for 40 years in CBS News’s Washington bureau, where she met many movers and shakers appearing on “Face the Nation.” Her clients included the television journalists Walter Cronkite and Eric Sevareid as well as Eleanor Roosevelt in her post-White House years and the Rev. Dr. Martin Luther King Jr.

Those who became president would often call her over to the White House in advance of television appearances. John F. Kennedy may have looked like a natural on TV, but he worked at it, Ms. Brown said. “He drove us crazy,” she said, with constant questions like whether he should cross his legs (“whatever makes you comfortable”) and whether he should take voice lessons (“yes”). He followed her suggestion and attended a workshop in New York City on television technique.

“He wanted to understand what cameras and lights and lenses did to him,” she told The New York Times in 1994. “He would walk behind the cameras and ask the technical people: ‘How do you mix the audio? Why do you have this light there?’”

She said he was the first president who understood the phrase “camera ready.”

And she understood, far more than the public did at the time, how much physical pain he was in. When she would adjust his suit jacket, she said, she could feel the braces on his back.

She also made up several first ladies. Jacqueline Kennedy, who could have drawn on the most sophisticated makeup artists in the world, chose Ms. Brown to prepare her for her famous televised tour of the redecorated White House in 1962.

Ronald and Nancy Reagan, coming from Hollywood, knew all about makeup and liked a lot of it, she said. But television producers often thought that the president arrived on set wearing too much rouge, and they would instruct Ms. Brown, just before airtime, to remove it. “And so I would,” she said.

When on call to the White House, Ms. Brown would arrive with a small kit of powder, concealer, liquid foundation and Kleenex. Her satchel also included a dark tie (in case the president was wearing one that might shimmer on TV) and a pair of high black socks (in case he was wearing shorter ones; she didn’t want him crossing his legs and exposing his bare skin).

Her basic rules for the color of attire still apply today: Avoid wearing red, because it bleeds onscreen. Avoid white, because it bloats the wearer. Avoid prints and stripes. She preferred solid blues, grays and jewel tones. She did not want the clothes to distract from the person, and she wanted the person to appear natural.

“Unlike high-fashion makeup artists who want to make a person look as glamorous as possible,” Ms. Brown told The Times, “my goal is to make people look exactly like themselves.”

Mary Lillian Josephine Brooks came from humble beginnings. Born on Aug. 8, 1914, on her family’s farm in McArthur Township, near the small Ohio town of Huntsville, she grew up without electricity or running water. She was the sixth of seven children. Her father, James Irwin Kerr Brooks, was a farmer and later an insurance agent. Her mother, Nellie (Haynes) Brooks, was a schoolteacher at a one-room schoolhouse.

Lillian and her siblings went to school in a pony cart. She earned her teaching certificate in 1933 after a two-year program at what is now Bowling Green State University in Ohio. She then went back to Huntsville and taught first, second and third grades at that same one-room schoolhouse, alongside her mother, who was teaching fourth, fifth and sixth grades.

She did graduate work at the Ohio State University campus in Cleveland and worked at a department store. On the bus to work one day, she met George Brown, a Navy pilot. They married in 1941, then lived on various military bases until settling in the Washington area in 1952. The marriage ended in divorce in 1961, and he died in 1992.

In addition to Ms. Gorrell, she is survived by another daughter, Kristi Brown; three grandsons; and two great-granddaughters. Her daughter Kimi Brown died of leukemia in 1975.

While working at CBS, Ms. Brown was also employed in the public relations office at George Washington University, as director of radio and television. She worked there from 1956 to 1966, then assumed the same role at American University from 1966 to 1976.

In 1976, Georgetown University’s public relations office hired her as its television coordinator. She hosted a university radio program, “Forum,” and in 1983 began teaching a course on public speaking. She also taught a summer course at Yale for female political candidates.

When Ms. Brown retired from Georgetown in 2009, the registrar told her that she couldn’t leave; the waiting list of students who wanted to take her course was too long. She left anyway — at that point she was 95.

ByMelissa KirschWelcome. It’s Thanksgiving, and for many of us it’ll be smaller and quieter than in years past. I recommend taking a minute to...
Read more
Fashion

ByHuffPost may receive a share from purchases made via links on this page. Prices and availability subject to change.They say imitation is the sincerest...
Read more
Fashion

ByPhilip GalanesI am a recent college graduate. I am also drowning in student debt. On my salary, there is no way I can save...
Read more
Fashion