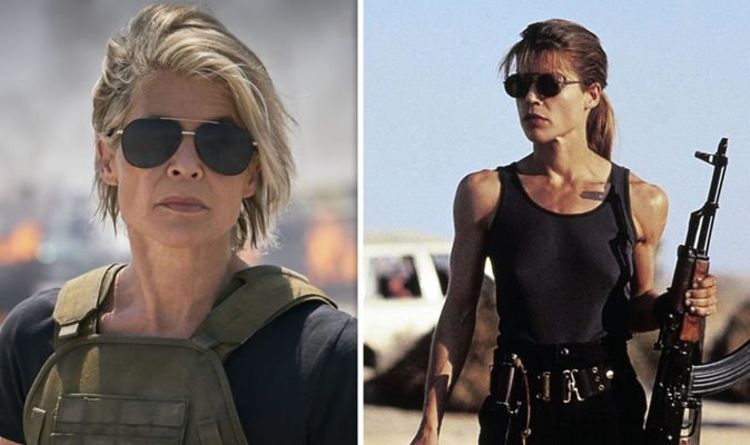 Terminator: Dark Fate is the latest instalment of the Terminator franchise. The movie is expected to hit our screens on October 23. But will Sarah Connor remain in the franchise once this film is done?

Linda Hamilton, star of Terminator: Dark Fate along with the Terminator himself, Arnold Schwarzenegger, is known for her epic action power as Sarah Connor.

The character is a formidable woman, ready to take on whatever powers she must in order to protect herself and her family.

Fans love seeing her and the chemistry she has with the Terminator, but Hamilton may be waving goodbye to her character once and for all, after joining the franchise in 1984.

Speaking to ITV’s Lorraine Kelly, when asked whether this is “it” for Sarah Connor, Hamilton looked shifty as she ummed and arred.

She said: “I don’t even want to think about it.”

Hamilton clearly shared her sentiments, clearly unsure as to whether she would want to put herself through making such a film ever again.

Hamilton added: “I may have to fake my own death so I don’t have to appear in the next one.

“If there is one. It really was hard – it was the hardest and the greatest film I’ve ever done.”

Hamilton is clearly not giving anything away, but she revealed how hard she had to work to get into a position where she could eve take part in the film.

She said: “I had to work pretty hard – I had gotten a bit chunky so there were no carbs in my life for a year.

“I got so lean that when I showed up they had to actually build me a butt – I was like, ‘I don’t understand?’”

However, Hamilton is clearly excited to see the film, wanting to make sure she watches with an audience in LA rather than on a private screen.

She added: “I haven’t seen it yet, not until LA [the LA premiere]. I decided to wait until it was completely ready.

Clearly, a film like Terminator: Dark Fate needs to be watched surrounded by people reacting to the epic action on screen.

What is Terminator: Dark Fate about?

The official synopsis reads: “27 years after the events of Terminator 2: Judgment Day, a new, modified liquid metal Terminator (Gabriel Luna) is sent from the future by Skynet in order to terminate Dani Ramos (Natalia Reyes), a hybrid cyborg human (Mackenzie Davis), and her friends.

“Sarah Connor comes to their aid, as well as the original Terminator, for a fight for the future.”

Terminator: Dark Fate is out in cinemas on October 23