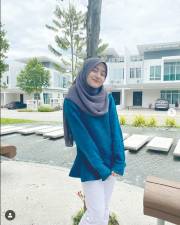 FROM the moment we saw Mia Sara Nasuha Muhammad Ridhuan in Nur Kasih The Movie (2011), she won over our hearts.

Mia started acting at a very young age. When asked how she got into it and if acting is what she wants to do for the rest of her life, she said: “I can barely remember to be honest. I was four years old at the time.

“I was cast in the drama series Adamaya alongside Lisa Surihani. Everything took off from there. As for the future, I cannot really say what the future holds really, as I am taking it one step at a time.”

Mia added that having acted with popular actress Lisa during her early years as an actress, she feels that she is strongly influenced by her when it comes to her own acting style.

This movie follows the hilarious exploits of a group of teens who encounter various challenges in school. It is the first telemovie in Malaysia to be recorded entirely using screencasts, and took six days to film.

The cast recorded their own scenes using their smartphones, with director Shamyl Othman supervising them through online video calls.

When asked how she feels about SMK: Raya Dekat Jauh winning the award, Mia said: “I feel happy that I was given the opportunity to participate in the drama. It was a bit awkward, as all the filming was done by ourselves.”

Since she now has firsthand experience shooting her own scenes, we were naturally curious if she wanted to try directing or producing next. Mia however said: “I believe that is the natural progression of things but it’s too early to say.”

She is still balancing life as a actress and a school girl. How does she do it? “With great difficulty,” came her reply.

Being young and successful (she is also an entrepreneur), Mia is a role model to many young people.

“I feel very honoured, and sincerely hope that I can live up to what is expected of me. I always try to be the best person that I can be and to inspire my peers.”

She also has a cause close to her heart. It all began when she was approached by Aman Palestin in 2017, and since then she has taken on the responsibility of creating awareness of the plight of the people of Palestine.

”I help by spreading awareness using my social media, and when time permits, visiting schools and booths.”

However, she has yet to visit any of the refugee camps due to her age.

She also has advice for Malaysians who want to help displaced people, like those from Palestine.

“We can help by several means. One simple way is to donate to Aman Palestin so that they can provide for the basic needs of the Palestinians.

“One can also spread what is happening on their social media to create more awareness.”

Other than school, acting and her efforts to help Aman Palestin, Mia said she doesn’t really have much free time. If she does, she uses it to spend more time with her family.

That is why while others were busy taking up cooking and making content for social media, Mia choose to spend the Movement Control Order (MCO) with family members, watching programmes via streaming platforms.

She recently started working on the sequel to SMK Raya Dekat Jauh, which will be out soon.

Right now she is taking things one step at a time. “Studies are important and I intend to do well, and we will see from there on how things unfold.”