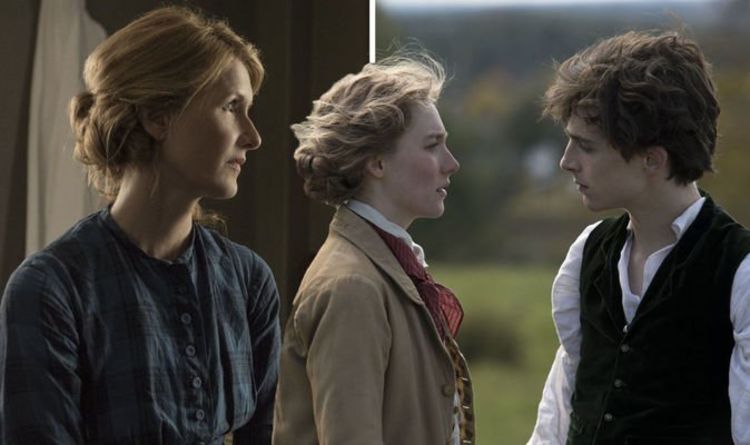 Greta Gerwig, director of Lady Bird, is back with a timeless American classic in bringing Little Women to the big screen. She is reunited with her Lady Bird stars Saoirse Ronan and Timothee Chalamet in the roles of Jo March and Laurie, will the rest of the cast is truly star-studded. But what does the ending mean and how is it different to the book?

In Little Women, Alcott follows the lives of four sisters living in a small house in Massachusetts during the American Civil War.

The story is semi-autobiographical, with it widely believed that Jo is Alcott herself.

In the story, Jo, Meg, Beth and Amy are seen as children, before they flourish into adulthood and begin getting married, travelling and entering the world of work.

The novel was originally publishes as two volumes, with the first showing how the girls grew up as children before the second half focused in on the characters dealing with the reality of life in adulthood.

In Gerwig’s version, the film does not tell the story in a linear fashion and, instead, jumps back and forth through these two volumes to pick out particular moments in each of the girls’ lives which are of interest.

While the whole book is adapted, by doing it in an achronological fashion, it highlights moments which fans should remember most closely, with many of these focusing on Jo and Laurie’s relationship, Amy’s growth from immature girl to woman, and Beth’s illnesses and death.

But the ending of the book is both wonderful and poignant, and in a way, Gerwig chooses to have her cake and eat it too.

In the original story of Little Women, Jo March spends a huge amount of time talking about how she does not want to marry, but eventually she marries her boarding house professor, Fredriech Bhaer, with the pair using Aunt March’s old house to open a school for boys.

In Gerwig’s version, however, both Jo March as played by Saoirse Ronan AND the Jo March who features in the story get their endings as they would like.

Rather than just seeing Jo with her lover, Gerwig shows Jo talking about her novel of Little Women with her publisher, Mr Dashwood (Tracey Letts.)

He is keen for there to be a happy ending for Jo, despite Jo telling him that she has always said she would not marry.

In the end, she rewrites the ending to be the actual Little Women ending, showing her character marrying the professor and starting a school for boys and girls to be educated together.

In this way, Gerwig gives Jo both endings, with the writer watching on as her novel of Little Women is printed with her own name on the front, contrasting from the beginning of the film, where the same book is shown with the name of the real author, Louisa May Alcott.

Alcott, in fact, did not marry, so it may be that a similar discussion occurred between her and her real publisher, which is mirrored in the film.

As a result, Gerwig gives Jo – and indeed Alcott – both endings to be faithful to the author’s life, her possible wishes, and the novel itself.

Little Women is in cinemas now