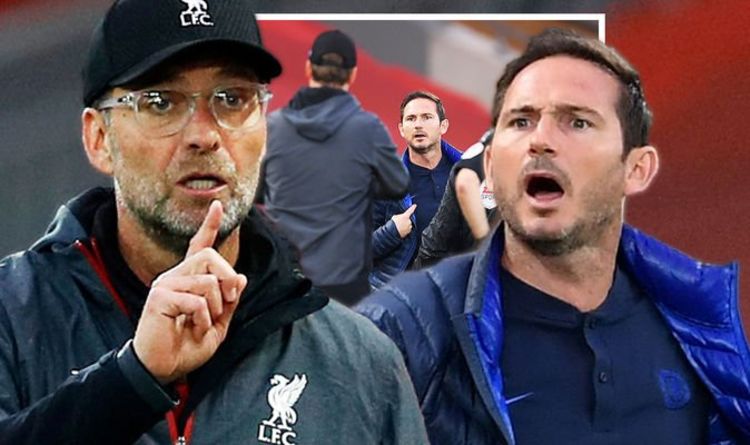 Liverpool boss Jurgen Klopp says he was unimpressed by his Chelsea counterpart Frank Lampard labelling the club ‘arrogant’ after a heated touchline spat on Wednesday night.

Sky Sports’ camera caught Lampard having to be separated from Jurgen Klopp by the fourth official before Trent Alexander-Arnold stepped up and curled a stunning free-kick past a motionless Kepa Arrizabalaga.

After the match, Lampard said of the incident: “I’ve got no problem with Jurgen Klopp, he has managed this team and it is fantastic.

“Some of the bench, it is a fine line between when you are winning and they have won the league, fair play to Liverpool Football Club but also don’t get too arrogant with it. In matchplay you get emotional and that is it.”

But behind the scenes footage caught the entire exchange and Lampard could be heard telling Klopp to ‘sit down’ and then directing his ire at assistant coach Pep Lijnders saying: “If he’s going off at me I’ll f****** say something. It’s not a f****** foul, I’m not asking you. You can f*** off and all. You think you can give it the big one, f*** off.”

Klopp was asked for his assessment of the incident in his press-conference ahead of their final game of the season against Newcastle.

And the Premier League-winning manager voiced his displeasure at Lampard’s attack on their attitude.

“We are not arrogant. We are pretty much the opposite,” Klopp insisted.

“Frank was in a competitive mood, I respect that a lot. For me after the game it’s over. What Frank has to learn is to finish it with the last whistle.

“Speaking about it after that is not okay. During the game, words used ok, But final whistle, close the book. He didn’t do that and I don’t like that.

“From my point of view you can say what you want, it’s after the game it’s completely over. I’ve said a lot in the past.

“He came here to win the game to make Chelsea qualify for champions league. I respect that a lot, what he has to learn to finish it with the last whistle. He didn’t do that.”

At the same time as Klopp was speaking, Lampard was holding his own media briefing and said he regretted the language used during the confrontation with the Liverpool bench.

“I’ve seen the video, I think in terms of the language I used, I do regret that,” he conceded.

“In terms of regretting having passion to defend my team, no, I could have handled it maybe slightly differently, to keep that language in.

“I need to be clear about this. Some of the reporting said that I was upset with the celebrating of the Liverpool team. Far from it, I think Liverpool should celebrate as much as they want with the season they’ve had.

“They can celebrate like they did after the game, after every goal they scored, and they will celebrate one more time with their fans when they can, I would have had a beer with Klopp after the game to toast their success.

“But there were things on the line which I didn’t like from their bench, not Jurgen Klopp, but their bench. Emotions run high in this game.”