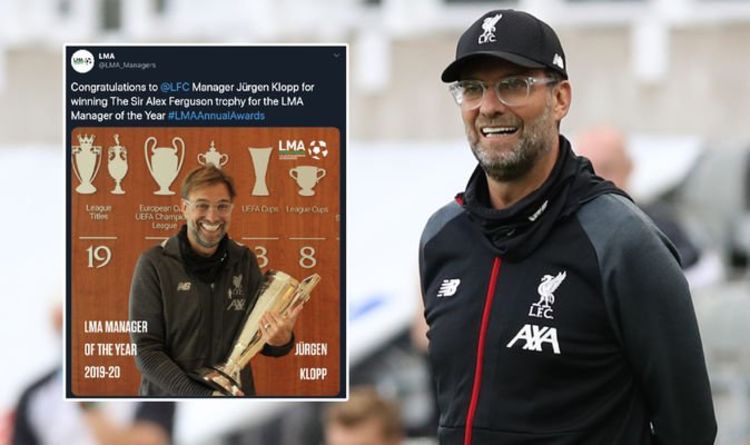 Klopp, who won the European Cup with Liverpool last year before their league success this term, told Sky Sports upon receiving the trophy: “I’m absolutely delighted to get this wonderful trophy. It’s really wonderful.

“I saw already who won it before and obviously a lot of big, big Liverpool names involved, not only Liverpool but really big Liverpool names as well. Bill Shankly I’m not sure if I found him but Bob Paisley, Joe Fagan, Kenny Dalglish, looks like he is all over the trophy, everywhere.

“Brendan [Rodgers] won it, well deserved. The name [of the trophy] is, Sir Alex Ferguson. I know it’s not 100 per cent appropriate as Liverpool manager but I admire him – not to say I love him.

“He was the first British manager I met and we had breakfast together, it’s long ago, I’m not sure he remembers it but I remember it forever because in this moment it was for me like meeting the Pope, if you want!

“It was absolutely great and from the first second we really clicked. I wouldn’t have thought in that moment that one day I would have the trophy in my hands that is named after him but I have to say thank you to a lot of people.