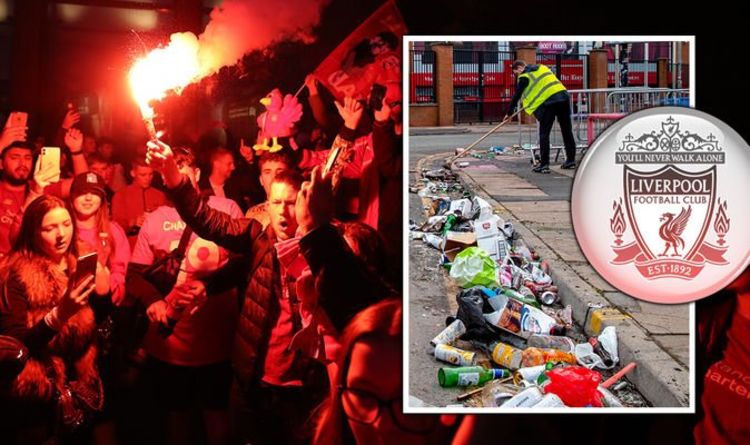 Liverpool have declared themselves “disappointed” that thousands of the club’s supporters turned up outside Anfield to celebrate their Premier League title triumph on Wednesday night, and repeated Jurgen Klopp’s message that they will party when it is “safe to do so”.

The Reds lifted the Premier League trophy for the first time in their history at Anfield after beating Chelsea 5-3, during which supporters outside set off fireworks and flares as they enjoyed their team’s first championship in 30 years.

Liverpool and the Merseyside Police had urged fans against congregating outside of the ground, calling on them instead to “keep Liverpool and the local community safe” by following government guidance.

Fencing was put up around the stadium but supporters still gathered outside the Kop, with around 3,000 thought to have turned up despite social distancing guidelines still being in place due to the coronavirus pandemic.

Many appeared in close proximity to one another on Walton Breck Road and a lot of fans were not wearing face coverings during the celebrations.

It follows similar scenes among Liverpool fans on the night that they were confirmed as English champions courtesy of Manchester City’s defeat to Chelsea last month, while others turned up the following night at the city’s Pier Head to party, during which the Liver Building suffered damage after fireworks were fired at the building, causing a fire.

Nine people were arrested on Wednesday night as the police issued a dispersal zone around the stadium, with the quarantine to remain in place until 9.30pm on Friday.

And Liverpool were not impressed that their pleas for fans not to gather together went ignored.

Their statement on Thursday afternoon read: “Liverpool Football Club would like to thank those supporters who stayed at home to celebrate the team lifting the trophy last night, protecting their loved ones and our city from the ever-present threat of this pandemic.

“We are, however, disappointed with the scenes outside Anfield last night and that more supporters did not heed the celebrate at home advice.

“The club and our city partners Merseyside Police, Liverpool City Council and Spirit of Shankly, have worked in-step for the past eight weeks to consistently encourage fans to support the team from home and we would like to thank them for their continued support and collaboration in the lead-up and throughout football returning behind closed doors.

“Thanks should also go to those from CleanEvent and Liverpool Streetscene Services, who did incredible work this morning cleaning up Anfield and surrounding areas.

“Our local community is the heart of our club and their co-operation and patience as our neighbours, as well as the engagement of our local ward councillors, the Safety Advisory Group and emergency services also deserves our gratitude.”

They did however repeat Klopp’s promise that Liverpool supporters will get an official title party when the COVID-19 crisis is finally over and mass gatherings are allowed.

“As we have said before, when it is safe to do so we will celebrate, until then protecting our city is the priority,” they added.

That follows comments from Klopp to Sky Sports after the trophy lift, when the German said: “Thank you very much, we should all together celebrate at home, drink and celebrate. when this bulls*** virus is gone we will celebrate together and have a party!”

Assistant Chief Constable Natalie Perischine, from Merseyside Police, said of Wednesday night’s events: “We put a comprehensive and appropriate policing operation in place ahead of the game, with the safety of the public paramount in our decision making.

“I want to thank all those fans who heeded advice to stay home and watch the celebrations on TV.

“Officers made a total of nine arrests outside Anfield last night for affray, assault, people who were drunk and disorderly and drug driving.

“The vast majority of the crowd were good natured and had dispersed by 2am.

“Thankfully we didn’t see the sort of incidents of disorder and criminal damage we saw at the Pier Head on 27 June, the investigation into which has seen more than 20 arrests made to date.”

Fans of Championship title-winners Leeds United also gathered in big crowds outside Elland Road on Wednesday night after the Whites received the trophy.

Leeds have been criticised after their players appeared on an open-top bus outside the stadium, but the Yorkshire club issued a statement defending their actions.

They said: “Following consultation with the SAG [Safety Advisory Group] and Council, Leeds United arranged for a bus to be parked outside the East Stand reception as a contingency to assist dispersal should a crowd congregate at Elland Road despite a month-long campaign from the club and supporter groups to encourage supporters to stay at home.

“The safety group believed was that a brief appearance from the players with the Championship trophy, would help to signal an end to proceedings, encouraging fans to head home safely.

“In challenging circumstances fan safety has always been our priority.”

Four Leeds fans were arrested for public order offences on Wednesday night to toast their return to the Premier League after 16 years away, after around 7,000 celebrated in the city’s Millennium Square on Sunday.

To make matters even more convincing, the man reportedly gave the airport the name of "Jon Burrows". Fans of the King will know Jon Burrows...
Read more