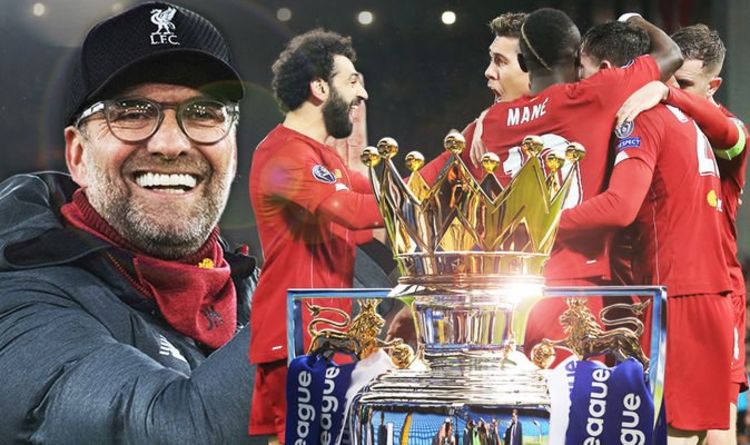 In an ideal world Liverpool‘s 30-year wait would have ended with a victory in front of a packed Kop but, the world being as it is, it was fitting that the title should be delivered remotely. The longest Premier League season in history has been won in record time by an extraordinary team.

Their distant rivals could not stop them and in the end, hard though it tried, the virus could not do so either.

For Jurgen Klopp the triumph is the culmination of five years’ work at Liverpool. Last season’s Champions League triumph was a big deal but with the Premier League he has delivered the Holy Grail.

Such was the collective yearning for title No 19 on Merseyside that Klopp could have been a cyberman bent on bringing Planet Earth to its knees and it would not have mattered as long as he ended the quest.

But it just so happens that Liverpool have lanced the boil with one of the most universally popular managers in English football history.

Klopp’s humanity, humour and common touch – his general good blokery – appeals to people a long way beyond the city’s boundaries. He has charisma, charm, warmth and an instinctive appreciation, through his waterfall of words, of what to say and when.

These are useful life skills for any vocation but for a Liverpool manager trying to remove the heaviest of monkeys from the club’s back, his touch has been golden.

Take this, in his programme notes from Wednesday night’s Anfield return against Crystal Palace on the pandemic.

“We all hate that this thing has happened but I am filled with hope for our future because I think as a society, across the world, we showed our best face,” he wrote.

“Ignore for one moment the politicians and their decisions and think how we reacted as people. We were responsible, we showed appreciation for the heroes who risked their lives for us, we learned, we connected, we cared and we realised that love is a more powerful motivator than fear.”

Klopp ‘gets’ it – and it is on a human level where his management has come into his own.

He is a tough task-master as anyone who heard the tongue-lashing Trent Alexander-Arnold received from the technical area at Everton on Sunday would appreciate but one to one he is more than just the boss to these Liverpool players.

“The players adore him because he cares about them,” explained midfield player Georginio Wijnaldum, simply.

The supporters too. To the faithful, Klopp seems like one of them and not just a club employee like Brendan Rodgers and Roy Hodgson before him.

Klopp is the first Liverpool manager since Kenny Dalglish who seems to intrinsically understand a unique city and its premier football club. He identifies with the working-class culture it is built upon and the emotion it engenders.

The circumstances of football’s return has necessarily toned down the badge beating and fist pumping but his success in uniting the supporters behind in the squad and turning the title pursuit into a collective quest involving more than just the team itself has been a defining factor of his tenure.

Klopp’s methods, based on speed of ball transfer and an aggressive defensive press, have transferred perfectly to the Premier League.

If, when he first arrived five years ago, Liverpool’s heavy metal football under him was a little too guitar heavy, it has been refined with the help of the smartest of ventures into the transfer market into a perfectly calibrated system.

The football Liverpool played in sweeping aside Crystal Palace on Wednesday night was a joy to behold for those fortunate few inside Anfield.