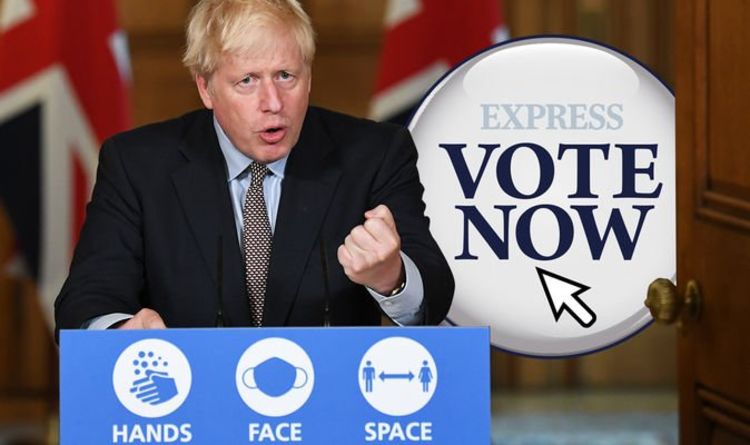 A grim-faced Mr Johnson announced new laws preventing gatherings of more than six people as fears of a second wave of COVID-19 infections continue to grow. The so-called “Rule of Six” is one of a raft of fresh measures which comes into effect on Monday. They were announced after the number of cases rose from 12.5 per 100,000 people to 19.7 per 100,000 in the UK in the last week – with a particular rise in infections among young people.

But Mr Farage was quick question why some people should observe the new restrictions while those attending demonstrations, marches or unlicensed music events ignored them.

The Brexit Party leader tweeted: “This draconian law that comes in from Monday to allow gatherings of only six people will not be respected by protesters and those going to raves, so why should the rest of us comply?”

His views were shared by others on social media.

Mason Dunn tweeted: “It makes no medical sense especially based on the actual fatality rate, which is low.

“Its a full authoritarian power grab if you ask me.”

Mortimer Duke said: “Exactly right – I was a model citizen abiding by all the rules before the BLM protesters were allowed to gather (and cause trouble) in numbers – the woke kneeling police let them run riot and ignore all the rules – so why should I comply?”

Marcos Perez took a swipe at recent Government comments in the Commons when he tweeted: “Nobody has to comply with the law as long as you break it in a specific and very limited way.”

Boris Johnson has urged people to limit their social contact “as much as possible” and to minimise interactions with other households as he outlined new measures to control a surge in coronavirus cases.

He said he was “sorry” two households that exceeded six people would no longer be able to meet in England from Monday and said he wished that he did not have to take such steps.

Addressing the first Downing Street press conference since July, the Prime Minister said: “If we are to beat the virus then everyone, at all times, should limit social contact as much as possible.

“It is safer to meet outdoors and you should keep your distance from anyone you don’t live with, even if they are close friends or family.

“People must not meet socially in groups of more than six – and if you do, you will be breaking the law.

“This will apply in any setting, indoors or outdoors, at home or in the pub. The ban will be set out in law and it will be enforced by the police – anyone breaking the rules risks being dispersed, fined and possibly arrested.”

Express.co.uk readers can vote in our poll on whether people in England should face an eye-watering £10,000 fine for failing to self-isolate. And let...
Read more
U.K.

Liverpool stabbing: Man dies after being stabbed in chest in horror knife attack

{authortext}Ministers are thought to be considering a two-week "circuit break" in a bid to slow transmission of the virus. The Prime Minister continues to...
Read more
U.K.

{authortext}Less than 48 hours after revealing that the UK is on the cusp of a second wave of coronavirus, Boris Johnson has unveiled his...
Read more
U.K.

{authortext}Express.co.uk readers can vote in our poll on whether they agree with another national lockdown. And let us know more about what you think...
Read more
U.K.

Coronavirus UK: Expert lashes out at second lockdown fears – 'You don't have the stamina!'

{authortext}Britain is likely to need to reintroduce some national coronavirus lockdown measures sooner rather than later, a former senior government health advisor has said....
Read more