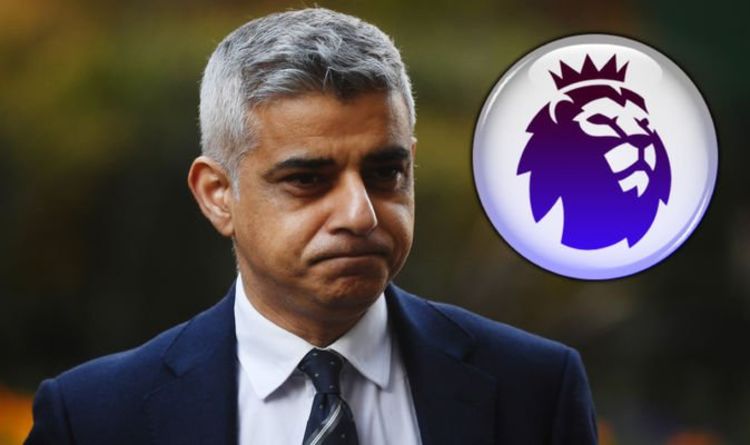 Sadiq Khan, the Mayor of London, is concerned that fans will turn up to stadiums because of “human nature” if Premier League matches are not held at neutral venues. The Premier League announced its provisional plans this week, dependent on government approval, for its season to restart on Wednesday June 17.

No matches in England’s top flight have been held since March 13 because of the coronavirus pandemic.

But after the successful return of Germany’s Bundesliga, the Premier League have ramped up their plans to resume the current campaign in recent weeks having days ago green-lighted a return to full contact training.

And a June 17 restart date has been decided upon as the league looks to hold its remaining 92 fixtures within a 39-day window, completing the season by the first weekend of August.

The BBC, Sky Sports, BT Sport and Amazon Prime will show the matches, with at least 29 matches to be made free to air – 25 by Sky Sports and four by the BBC.

The return to action will see matches held at new kick-off times with four time slots on Saturdays and Sundays, as well as games on Friday and Monday evenings and two different kick-off slots on Tuesdays, Wednesdays and Thursdays.

But Khan, a self-confessed Liverpool fan, is cautious about the return of the Premier League with the latest plans seeing the bulk of fixtures held in a home-and-away capacity as normal.

Previously, the idea of all matches being held at neutral venues was mooted – but was met with great opposition, particularly from the bottom six clubs.

The Premier League is committed to playing all the remaining fixtures home and away “where possible”, it said in a statement, but will cooperate with the police “at a local and national level”.

Some fixtures may have to be moved to neutral moves – with Manchester City vs Liverpool and Manchester United vs Sheffield picked out as ‘high risk’ fixtures.

Liverpool’s Merseyside derby clash with Everton, provisionally selected for Saturday June 20, has also been selected as another match which might have to be played outside of Liverpool.

And Khan told LBC: “I am concerned about any action that could inadvertently lead to the virus spreading.

“Let me make a confession. Even though I’m a south Londoner, I support Liverpool and that’s why a small part of my brain is keen for us to return.

“But actually the bigger part of my brain is saying safety is what matters.

“We don’t want to inadvertently, for the best of intentions – all of us need cheering up, there’s nothing more joyous for sports fans than watching sport on TV, even without the crowds – but we need to make sure we don’t inadvertently give an opportunity to the virus to spread.

“I know, human nature as it is, fans will turn up to see the coach arriving, to listen to the atmosphere – the players inside the stadium even though they’re not allowed in, to see the coach leaving, to buy t-shirts and scarves, police and councils need to enforce the rules.