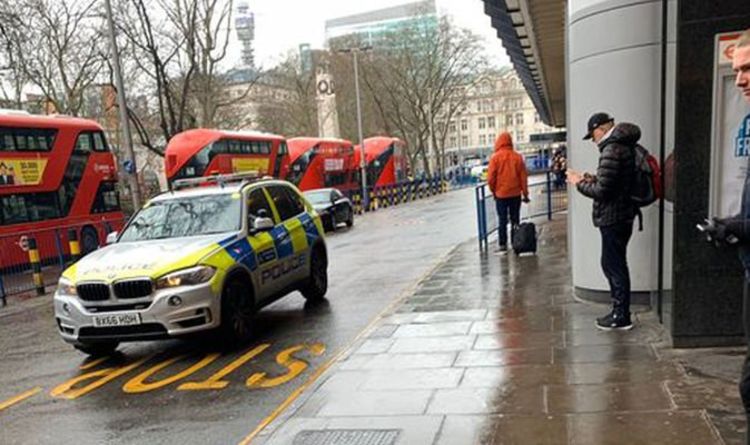 Poeple have taken to social media to report of the ongoing chaos and evacuation at the London station. There have been reports of ‘police with guns’ and ‘panic’ at the central London station.  Carys Hannah tweeted: “Got off the train at London Euston & went down the escalator to the underground.

“As soon as I reached the gate, security closed it off. One of them told me there’s been a stabbing.

“I really hope the person who was stabbed will be OK.”

Nick Day tweeted: “What was the panic at euston underground just now about?

“Saw people running up escalators and armed police heading towards it #euston”.

Tom Tracey tweeted: “Dunno what’s going on at Euston we were getting underground and got told to evacuate and then loads of police cars turned up”.

A spokesperson for TfL confirmed Euston bus station is closed due to a “police incident”.

TFL said: ”Buses serving Euston are being diverted or terminate [will] earlier than usual. Please speak to the driver before boarding.”

London Euston is one of the biggest station’s in the city with trains going to Liverpool Lime Street, Manchester Piccadilly, Edinburgh Waverley and Glasgow Central.

ByPrime Minister Boris Johnson has been warned that he could be ousted from Number 10 if he doesn't secure a deal which protects the...
Read more
U.K.

Rapid tests could get students home at Christmas

ByA schoolboy had his grandparents smiling with his reaction to them winning £30,000 on People's Postcode Lottery. Lucky Susan Spearman, 68, was one of eight...
Read more

ByTim Alberta This is nothing like 2016. All of us—Republicans and Democrats, journalists and party operatives, political junkies and casual observers—are held hostage by memories of...
Read more

By"Facebook had a big impact on the 2016 Presidential election. Naturally, we wanted to know - what could the impact on 2020 look like?"...
Read more