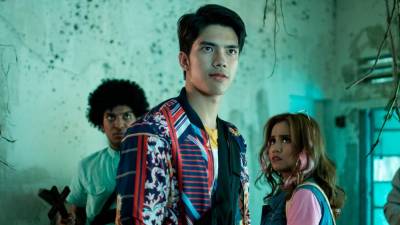 HAVING confidence is good, but overconfidence can destroy a person. Nabil Aqil understands this fact perfectly.

Three years ago, when the handsome model expressed a desire to act for the first time, a few film offers fell into his lap.

“I was not ready for the big screen,” confessed 22-year-old Nabil, who was born in Perak and raised in Kuala Lumpur.

To gain some confidence before making his feature film debut, he acted in several television dramas and series. Three years after he began acting, his first feature film, the comedy-horror, Takut Ke Tak will be hitting cinemas today (Aug 27).

The story centres on film student Abbas (played by Nabil) and his friends, who are determined to make the best horror movie for their graduation project.

They have picked a haunted house for their shooting location. Soon Abbas and his friends realise that there are restless spirits around them. The group must now figure out a way to escape the haunted house.

Others in the cast list include Arwind Kumar, Fabian Loo, Ika Nabella and Han Zalini.

“What I like about Abbas is he has leadership qualities and that he cares for his friends,” Nabil says.

“Abbas is not perfect. He can be overconfident, and being over confident is never a good thing.”

One of the biggest differences between him and Abbas is that Abbas does not believe in the spirit world.

“I never had any experiences with ghosts,” Nabil confesses.

“But I have heard stories from many of my friends who have had ghostly experiences.”

Hearing these stories was enough to convince him that there are restless spirits out there.

Nabil also loves the fact that the film has a multi-racial cast, which reflects the society we live in.

“It is a unique thing, that we can live harmoniously in a multiracial society, and we should appreciate that fact and never take our unity for granted.”

He also admired how director Muzzamer Rahman was able to create a fun atmosphere on the set, while still bringing out the best from his cast.

“I would love to work with him again.”

When asked if there were any other film directors he would love to work with, he says: “I would love to act under a female film director. I have never worked with one before. I want to know if there is any difference between working with a female director and a male one.”

He adds that his favourite actors are Farid Kamil and Syafiq Kyle.

“Farid can carry his scenes convincingly, while Syafiq is a natural on screen,” he says.

Interestingly, Syafiq is his uncle through his father’s side of the family.

“I am hoping in future, we can act in a film together,” he says.

“I admire my uncle very much, because he worked very hard to be where he is today.”

“I admire how Keanu is a great and kind human being in real life, while Jake gives performances that you feel like copying,” he says.

His favourite movie is the Avengers, and he also loves the Marvel Cinematic Universe. Out of all the characters in the Avengers, he admires Thor the most.

“I love his hammer [which is called Mjolnir],” he says with a laugh.

“It would be cool to have a hammer like that.”

He finds a certain joy playing villains. To date, he has played two ‘bad guy’ roles, the first in the TV series Celup where he stars as a heartless playboy, and the second in a short film Sayap, where he plays a school bully.

“I would like to play more negative roles,” Nabil says.

His parents run a cafe which specialises in serving Japanese burgers, and he is the eldest among three children. His brother Imran Aqil who is one year younger than him is also following his footsteps in the entertainment field, as an actor and TV host. He also has an eight-year-old sister Maia Kathaleia.

He started his modelling career at the age of 16 when a talent scout found him through Instagram.

“My first modelling assignment was to walk on the runaway to promote wedding attire,” he says.

“The organiser felt I was very tall and that I could carry those clothes convincingly.”

At the moment, Nabil says that he is still single.

When asked what he is looking for in a girlfriend, he says: “It will be a bonus if she was as tall as me. But even if she is not tall, it does not matter.

“She must look after my heart. The last thing I want is a broken heart.”