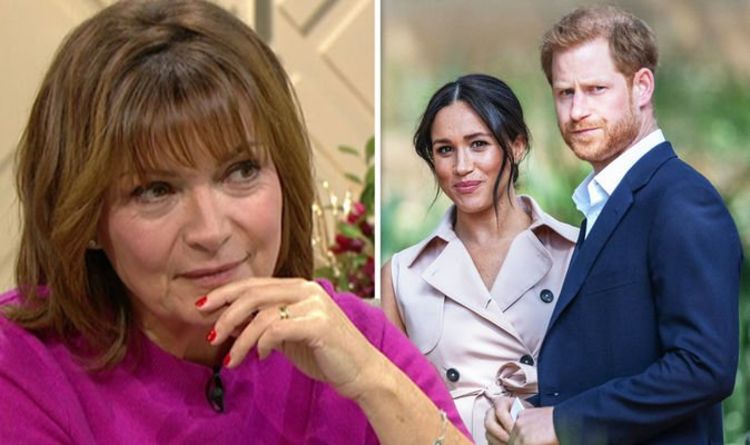 It is claimed the Netflix deal will be similar to that which Michelle and Barack Obama signed when they left the White House in 2017.

Lorraine has since addressed Prince Harry and Meghan’s deal and claimed the pair will need to ensure that Netflix makes a return.

The small-screen star insisted that when it comes to content it is all about “ratings”.

READ MORE: Naga Munchetty’s subtle dig ‘I’m not for everyone’

“In television, it’s all about eyeballs. Ratings matter and Netflix will hope the star power of one of the most famous couples in the world will bring an upsurge in subscriptions.”

The TV veteran suggested that streaming platform will want to see Harry and Meghan on-screen in “big fat close-ups”.

Lorraine continued in her latest column for The Sun: “Netflix has effectively bought ‘Brand Sussex’ and it will want to see Harry and Meghan on screen, in big fat close-ups, in order to get its money’s worth.

“The couple have already taken paid work for making speeches at corporate events but that has dried up in the coronavirus world, so financially they needed this deal.”

Despite this, the ITV presenter added that she believes the couple could make some “good” content and “attract every Hollywood A-lister”.

When the deal with Netflix was confirmed, the Sussexes said in a statement: “Our lives, both independent of each other, and as a couple have allowed us to understand the power of the human spirit: of courage, resilience, and the need for connection.

“Through our work with diverse communities and their environments, and shining a light on people and causes around the world, our focus will be on creating content that informs but also gives hope.

“As new parents, making inspirational family programming is also important to us, as is powerful storytelling through a truthful and relatable lens.”

This enterprise is set to be a separate entity from Archewell, Meghan and Harry’s charitable foundation.

Details of their Netflix shows are yet to be announced but are said to include an innovative nature docuseries and an animated series that celebrates inspiring women.

The Sussexes are currently living in Montecito in Santa Barbara in the US with their 16-month-old son Archie, after stepping back from royal duties in March.

She’s spent decades on our screens presenting much-loved shows such as Springwatch, Autumnwatch and Animal Park. So, when Kate Humble calls from her home...
Read more
Celebrity

Erin Silvia Tameka ‘Tiny’ Harris took to Instagram to share a series of loving pics of her and her husband T.I. and thank him for...
Read more
Celebrity

Strictly Come Dancing host Claudia Winkleman, 48, loves her job, and who wouldn't? Being at the very centre of one of Britain's most loved...
Read more
Celebrity

Expressing his thoughts, ex Top Gear presenter Jeremy said: “All week, we’ve been told that the coronavirus is now bouncing back in Spain and...
Read more