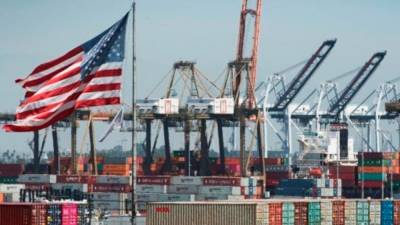 LOS ANGELES: The Port of Los Angeles, the biggest in the United States, has been significantly impacted by the new coronavirus outbreak and is forecasting a 15 to 17 percent drop in activity in the first quarter of the year, officials said Wednesday.

Eugene Seroka, the executive director of the port which mainly handles cargo to and from China, told the Los Angeles City Council that the facility experienced 20 to 25 percent less business in February compared to the same period last year.

He said some 40 vessels that had been scheduled to arrive at the port through April had been cancelled due to the outbreak of the virus.

“We have advised the marketplace that we expect quarter one container volume to be down 15 to 17 percent,“ he added.

Seroka warned that the drop in business would impact workers and the wider community.

“In summation, for our port community, less cargo means fewer jobs,“ Seroka said, adding that some dock workers had been asked to stay home because there is not enough work.

“It is our estimation that the effects of the coronavirus and the downturn in trade will cost us tens of billions of dollars in the industry when all is said and done,“ he warned. “The issue today is that empty containers, perishable commodities and agricultural products are stacking up at our ports because of those vessel sailing cancellations.

“That will cause the American farmer further harm on top of the trade tariffs,“ he said, referring to the US-China trade war.

Phillip Sanfield, a spokesperson for the port, told AFP that the drop in activity was similar to the decline experienced during the 2009 recession.

He said more than half of the port’s business is with China which mainly exports furniture, auto parts, apparel, footwear and electronic to the US.

Among the goods the US sends to China are recycled products, raw materials such as cotton, scrap metal and some agricultural goods including soybeans and beef.

The American Association of Port Authorities said in a statement last week that cargo volume at many US ports during the first quarter of 2020 may be down by 20 percent or more compared to 2019 because of the spreading virus.

“Things will rebound eventually, and indeed we’re hearing news about factories that are coming back on-line in China, and ports there ramping back up to move the cargo,“ Chris Connor, president and CEO of the Association said.

“At the same time, supply chain managers around the world are working tirelessly to keep cargo moving to ensure that the goods we need are available when and where we need them.”

The outbreak of the new coronavirus, or COVID-19, and the mounting number of people infected has sent shockwaves through world markets.

More than 90,000 people have been infected and around 3,200 have died worldwide from the virus, which has now reached some 80 countries and territories. -AFP