Louisiana tells meteorologist Jim Cantore to 'stay home' amid Hurricane Delta: 'I get it' 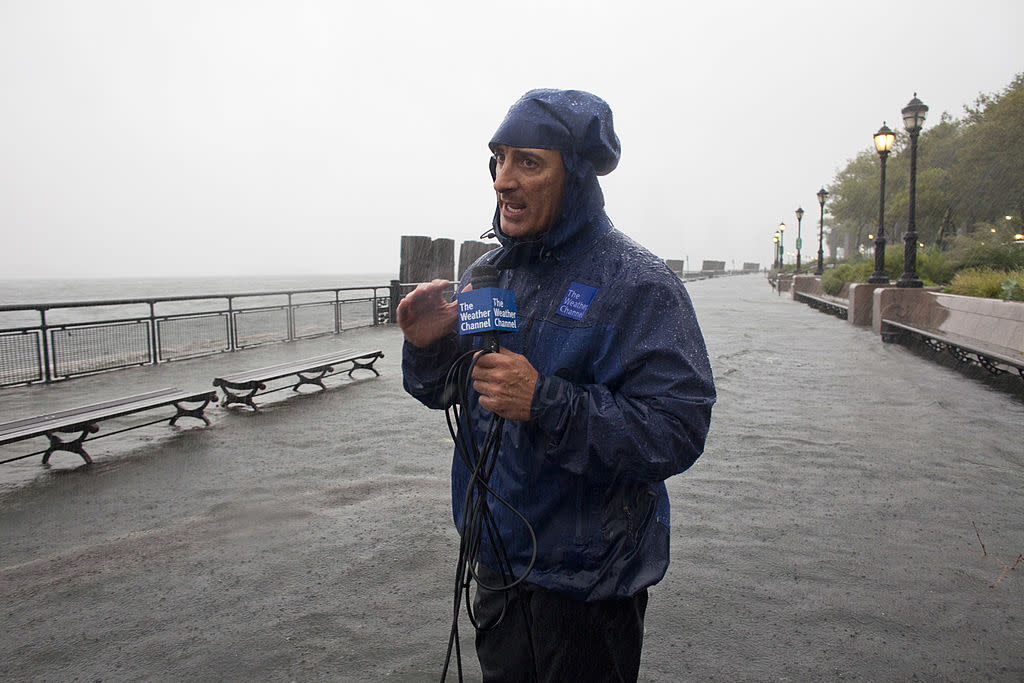 The presence of the Weather Channel’s Jim Cantore is often an ominous sign, since he’s a longtime stormtracker and the meteorologist you see on TV standing so close to the water, out in the rain and lightning when everyone else is hunkering down.

As Hurricane Delta approached the East Coast this week, Louisiana decided to be proactive in keeping the storm — and therefore Cantore — away. The sign over the Lake Pontchartrain Causeway outside New Orleans, between Metairie and Mandeville, read, “Jim Cantore, Stay Home.” The meteorologist jokingly responded on Twitter, “Where’s the love?”

In all seriousness, Cantore tells Yahoo Entertainment on a phone call Wednesday, that he completely understands.

“I get it, trust me. This is my third or fourth flight to New Orleans this year,” Cantore says as he traveled by car from New Orleans to the south central Louisiana city of Breaux Bridge.

Cantore’s tired of 2020’s particularly active Atlantic hurricane season, too. He had planned to spend this week on a “nice leaf-peeping trip” in Vermont. Instead, more weather. Cantore is covering his 105th tropical system.

“My producer and I walked up to each other at the airport and we’re like, ‘Oh, gosh, you again,’” Cantore says. “We’re spending more time with each other than we are with our girlfriends and wives.”

Cantore, who’s worked at the Weather Channel since 1986, is used to people being wary of him. A 2011 ad for the network depicted him arriving at a beach to vacation, but everyone else went running at the mere sight of Cantore. A lifeguard called people out of the water and a man stocked up on supplies at the grocery store. “Look, we get it,” a narrator said, “usually, when Jim shows up, bad weather isn’t far behind.” In the ad, Cantore said to himself, “Every vacation.” The last line is, “Catch the Weather Channel’s Jim Cantore all summer long, just hopefully not on your beach.”

“It’s not a lot of fun,” Contore says of being a harbinger of bad weather. “It’s a good time in the winter cause snow storms are so much more fun, but, you know, when it’s a flood or a tornado outbreak or certainly a hurricane, you know bad things are going to happen, and it’s kind of unavoidable.”

“They think I go there to drive their business away, which I don’t do,” Cantore says of the “downright mean” messages he’s received from the tourists’ haven. “I always make it a point to tell everybody when the storm is going to be over and they can come back.”

Still, it’s worth it for Cantore: “At the end of the day, if it gets people out of harm’s way and they’re like, ‘Well, Cantore’s here, so it must be getting bad,’ then OK, mission accomplished.”

As for that sign in Louisiana, it regularly displays unexpected messages, such as, “Use Dat Blinkah” and, after the New Orleans Saints lost an important game because of a controversial call from a referee, “We were robbed.” The one-liners are chosen by employees and, often, submitted by commuters. A February 2019 story in the New Orleans Times-Picayune explained that a staff committee makes the final selections, often turning them into safety messages. (Please see, “Tailgating is for football not the Causeway.”) Yahoo Entertainment’s request for comment about the origins of the Cantore comment went unanswered.

Cantore has no hard feelings. And he also hopes this is the last of the year’s events, but he wouldn’t be surprised if there are a couple more on the way. Hurricane season lasts through November.

“I think,” Cantore says, “the next sign I want to see is from like Killington [Vermont] or Steam Boat Springs [Colorado] or Breckenridge [Colorado] or Alta [Utah] or something and it says, ‘Jim, come on out and bring the snow.’”