Love Island 2020: Who left Love Island? Who are the new couples? 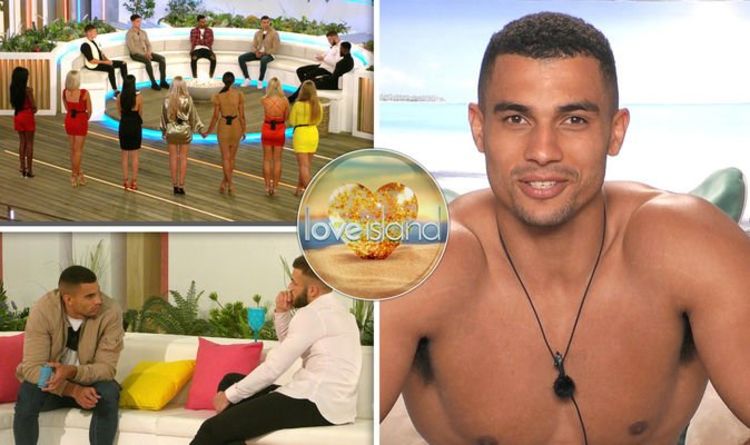 In a dramatic recoupling, the twins were split up as Eve was dumped from the Island.

Speaking after being dumped she said to the Islanders: “Look after my sister for me.”

The sisters said an emotional goodbye to each other, with Jess now coupled up with Nas.

Before the recoupling, the girls were getting to know the new boys in the villa.

Throughout the day Paige Turley got to know Finn Tapp.

This left the other boys wondering just how the dramatic recoupling would go.

The group were called to gather around the Fire Pit when Shaughna received a text.

Before revealing who they were recoupling with, the new boys revealed their thoughts about the decisions they had to make.

Finn said: “It’s a massive night, especially for us.”

Connagh agreed with his fellow Islander: “Definitely the pressure is on, I’m starting to feel it.

“My head’s a bit all over the place at the moment.”

Love Island: Which couples are still together from Love Island?  [INSIGHT]

At the moment, Mike Boateng and Leanne Amaning are the favourites to win Love Island.

Callum Jones and Shaughna Phillips are the second-favourites to win Love island at odds of 6/1.

However, Shuaghna could also win the competition with new boy Connah Howard.

They are at odds of 7/1 at Coral as a Connor Durman and Sophie Piper.

Coral spokesperson Harry Aitkenhea said: “Mike and Leanne have surged to the top of the betting and are now the clear favourites to win Love Island’s first-ever winter series.

“Shaughna is the next most likely winner, perhaps with either of Callum or new boy Connagh.”