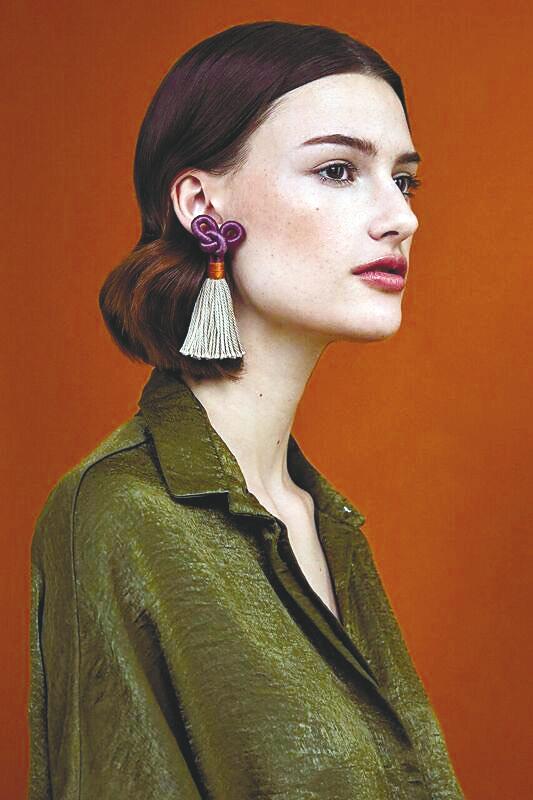 LORRAINE LEE has created an expressive space to manifest her artistry and for her memories to inhabit, while she tells highly personal stories that have shaped her life. Her creative impulses stem from the instinctive exploration of her enduring emotions – a curiosity for stories, longing for human interest and interaction, and nostalgic and melancholic memories of the distant past – as she embarks on a self-reflexive journey with Talee Studio.

Talee is more than an accessory label; it’s an explorative art project in which she takes artistic inquest to a new level over a series of developing events, uncovering stories threaded with struggles and resilience, represented through oversized tasseled earrings.

By discovering these resplendently beautiful tassel earrings with intricate knot detailing, we’ve also witnessed a painstaking degree of the designer’s virtuosic pursuit within art and craft, as well as in the fashion and design elements that she has invariably imbued into each creation.

“The emotion attached to knot tying is multi-layered for me,” said Lee, describing the intrinsic ideas that she carried long before the birth of Talee.

“In 2010, my father was diagnosed with Brugada Syndrome, resulting in hypoxic brain injury and short term memory loss. I became preoccupied with the concept of memories, which lasted throughout my degree studies in Fine Arts & Architecture at the University of Calgary.

“I was then let go from my first job (in Canada) in June 2017 following major layoffs that were happening within all industries at the time. The incident left me feeling lost, dejected and cut off from my creative side.”

In an attempt to reconnect some lost sense of creative spirit and life force, Lee revisited the art of knot-tying, which had been part of therapy exercises to jog her father’s memories.

The process gave her emotional stability, and a strong sense of attachment.

She explained: “It started out as a form of cognitive therapy for my father, who was once a boating enthusiast and a boy scout during his younger days. What I did not expect was for it to become an avenue for healing and discovery.

“Somewhere along the way, knot-tying began to reignite my drive to create. Not long after, Talee Studio was born.”

She established the brand in August 2017, and the name Talee is a pun, deriving from the Malay word ‘tali’ meaning ‘rope’, but blended with her last name.

“Once a painful reminder of times past, I now see knot-tying as an opportunity to spend time with him in the present, and to honour his past at the same time. Even today, in the context of Talee, knot-tying is a form of personal therapy. It grounds me and heals me.

“Growing up, he would always tell me to: ‘Look beyond, be observant.’ I’ve carried this mantra in my work and in my life every day since.”

Her ability to integrate challenges to create a new design vocabulary is exceptional. It allows her to reproduce memories in a tangible fashion, allowing her to remember and live by them, as well as wear them.

Lee has a way of contextualising symbolic ideas in a decadent and poetic manner, transforming seminal inspiration into artistic reference. At the intersection of stories and memories, the idea of knot-tying has very distinctive connotations with hints of subtle undertones that extend beyond its intended functional purpose as a knot.

On one hand, the Talee’s knots carry notions of sentimental dispositions that represents strength, hope and the invaluable memories that tie us to the people around us.

Knots are also a prevalent trope with telltale symbolism in various literary and cultural origins, signifying good fortune, union and continuity, among others.

Fashion, like art, needs context to make sense, even with Lee’s localised narrative superimposed onto the earrings. Its intertextual discourse, however, is far more universally appreciated.

“An important part of my creative flow is to deconstruct the story my work tells, to recreate it and reintroduce it through the unseen beauty it represents. I’m infinitely fascinated by the tectonics of material behaviour, in which case, deconstructing and experimenting are both keys to my prototyping phase,” said Lee, whose work combines conceptual rigour with technical excellence.

The rigid and traditional fashion calendar may still dictate the industry, but Lee has laid down a non-seasonal approach guided by a non-linear timeline for a more personal take when releasing collections.

Each collection is informed by its colour schemes to present an entirely new narrative, so that it can be understood by its story, rather than read by season.

In fashion, aesthetic is obviously paramount. Talee’s designs are built on the embodiment of colour, galvanised by Lee’s feelings or surroundings at any given time to convey distinctive nuances.

“It can come from travels, conversations, memories or moments of reflection; where the knots are like my canvas, and the colours are like my paintbrush that I use to tell the story behind each collection,” she enthuses.

Therefore, colours aren’t just generic colours, they’re nonchalant, almost lyrically named. What you thought was ‘green’ is, in fact, ‘seaweed’, and what was ‘pale-red’ is actually the ‘blush’ on your cheeks … it’s not ‘purple’, it’s ‘fig’; it’s not ‘washed-yellow’, it’s the ‘colour of the moon’.

Talee Studio serves as a memory bank, or rather, a memory palace for Lee to reminisce about the past when needed to. And with the knotted earrings, Lee has fashioned a new meaning to the idea of wearable stories.