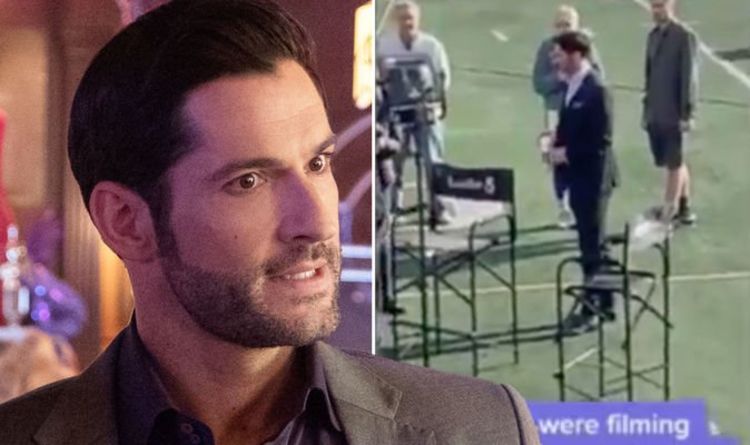 It was recently confirmed that the final season will take a cue from other Netflix show Riverdale and feature a musical episode. This clip posted by a Lucifer fan doesn’t confirm anything yet, but it could contain several clues as to what the all-singing, all-dancing chapter could entail.

Spied at the unlikely location of a high school sports stadium, Lucifer (played by Tom Ellis) was spotted by a student looking dapper as always.

For some reason it appears that the Devil has taken a break from his sovereign duties in Hell to hang out with some cheerleaders.

Several fans are speculating that this set video might have revealed the setting for its anticipated musical episode.

The video was posted via an Instagram video on Reddit by user Bear4459 and mainly comprises wide shots of Tom on set.

The Lucifer fan accompanied the footage with the tagline: “So they were filming LUCIFER at our school for season 5 and wait till the end.”

If there was any doubt as to what was being shot, Tom shows up at the end of the video taking a break to meet the fan who was filming it.

The footage isn’t completely clear, but it appears that Lucifer himself is dancing along with the cheerleader’s routine.

Fans took to the comments to speculate that this could be the mysterious musical episode that was confirmed back in January.

However, since it has also been confirmed that an episode later down the line would feature a more ambitious musical episode, this could be fans’ first glimpse at the second half of season five.

Contemporary cheerleaders and footballers don’t exactly scream 1940s pulp cinema either, so it would be safe to assume that this number will be appearing in the later episode.

Another fan wasn’t so happy, and protested in the comments: “I have watched too many TV show endings to find that when some of them end on a musical number, it’s never that good.

“Now I see it as kind of a cheap way to cut things off. I love Lucifer too much for them to do that.”