Lunar discovery could rewrite understanding of how the Moon was... 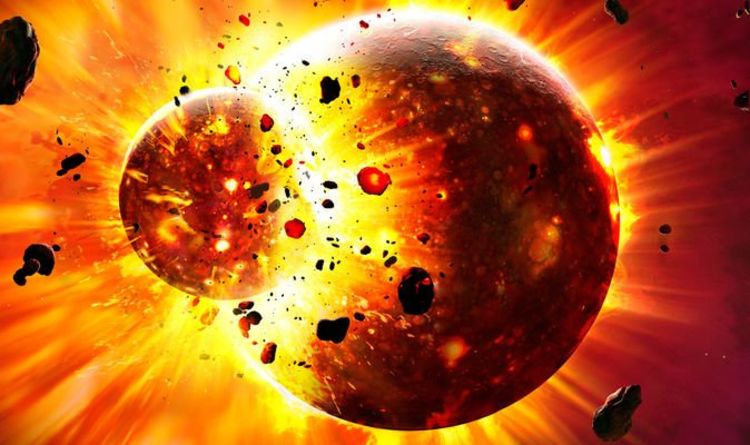 Scientists believe the Moon was formed when a Mars-sized infant planet – known as Theia – hit Earth with a glancing blow, striking at a 45 degree angle some 4.5 billion years ago. As a result, chunks of Theia and Earth collected in Earth’s orbit to eventually form the Moon.

Chunks of molten rock from Earth joined the synestia, which allowed the Moon to form.

In astronomical terms, synestias are extremely brief, only lasting for a couple hundred years, before they shrink rapidly, causing rock vapour to condense into liquid, which ultimately becomes the core of a planet, or in this case the Moon.

Moon samples from the Apollo missions revealed that the Earth and our lunar satellite are almost identical twins in terms of oxygen isotope levels, which begged the question as to how similar Earth and Theia were.

Either Earth and Theia were almost identical, which is extremely unlikely, or or their oxygen isotopes were fully mixed in the aftermath of the impact, which has been difficult to model in simulations.

However, new research has found that different parts of the Moon have different oxygen isotope levels – some the same as Earth, where as others are alien so must have come from Theia.

Erick Cano, a research scientist from the University of New Mexico, said: “Our findings suggest that the deep lunar mantle may have experienced the least mixing and is most representative of the impactor Theia.

“The data imply the distinct oxygen isotope compositions of Theia and Earth were not completely homogenised by the Moon-forming impact and provides quantitative evidence that Theia could have formed farther from the Sun than did Earth.”

Zach Sharp, from University of New Mexico’s Department of Earth and Planetary Sciences, added: “This data suggests that the deep lunar mantle may have experienced the least mixing and is most representative of the impactor Theia.