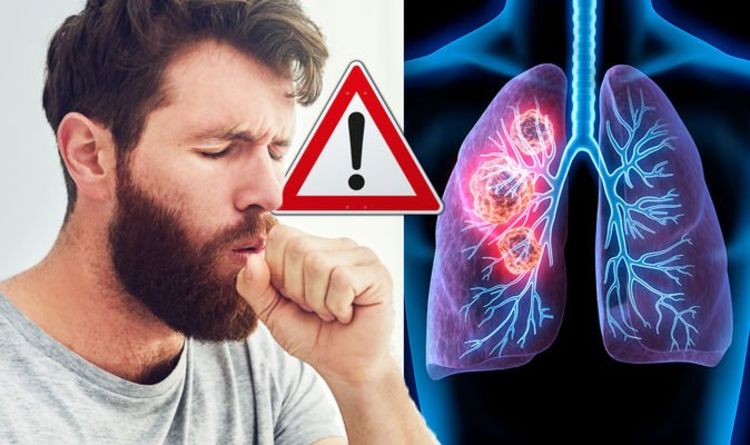 Lung cancer is one of the most serious types of cancer to be diagnosed, as it’s usually difficult to spot until it has spread to other parts of the body. You could be at risk of the disease if you develop a cough that’s accompanied by a pain in your chest.

One of the most common early warning signs of lung cancer is having a pain in your chest or back whenever you cough.

READ MORE: Lung cancer symptoms – the sign in your weight

“The early symptoms of lung cancer may be a slight cough or shortness of breath, depending on which part of the lung is affected,” it said.

“As the cancer develops, these symptoms may become more severe or intense.

“Like many other types of cancer, lung cancer may also cause systemic symptoms, like loss of appetite or general fatigue.

“When lung cancer does cause signs in its early stages, they may vary from person to person but commonly include pain in the chest, back or shoulders that worsens during coughing, laughing or deep breathing.”

Other early warning signs of lung cancer include developing a new cough that tends to get worse over a period of time, and having a cough that produces blood.

Hoarseness, wheezing, and unexplained weight loss could also be caused by the condition.

Some patients have even reported a swelling in the face, difficulty swallowing, and even changes to the appearance of their fingernails.

But, lung cancer symptoms don’t tend to reveal themselves until the disease has become advanced, as the lungs have few nerve endings.

ByThe increase in body fat and the distribution of fat in the body was measured using a magnetic resonance imaging (MRI scans) before and...
Read more