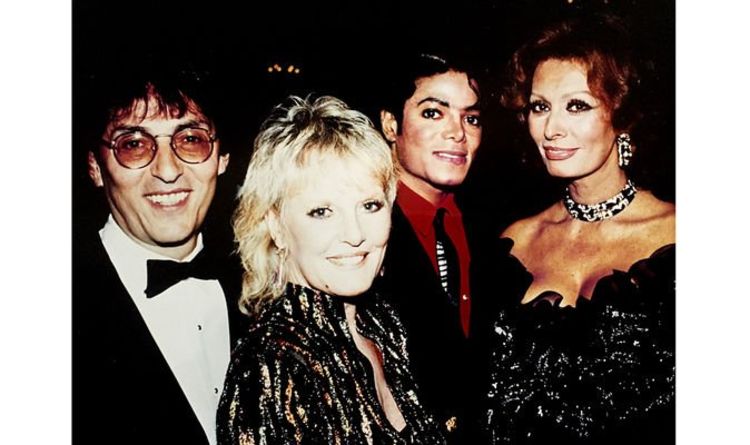 “This is me at a party thrown by David Gest back in the 1980s. It was a night at the Beverly Wilshire Hotel in Hollywood. Here I am with Michael Jackson, Petula Clark and Sophia Loren. Michael and I had a wonderful night of reminiscing about the times he came to my house when I was living in Bel Air in the 1970s. I’d known Petula Clark for many years back from my days working on the New Musical Express but I didn’t know Sophia Loren at all.

I first met Michael when I was asked to write the words in 1971 to the melody that was going to become Ben. It was Walter Scharf, with whom I’d written my first musical, Maybe That’s Your Problem, who asked me. The movie was about a rat called Ben who befriends a seriously ill boy with leukaemia. When I met Walter and heard the melody and saw some clips from the film, the words for Ben came easily. The studio making the movie then had to find someone to sing it and Michael Jackson’s name came up. He had just announced he was going solo and so we met up with his father, Joe, at Walter’s studio in Brentwood.

Michael loved the song and went on to record it. It shot to number one in the American charts and was nominated for an Oscar. Ben was a very successful song for me. I got to know Michael at this time. He was only 14. When I moved to LA in 1974, I saw more of him. We rented a house and he’d come over and play pool with my sons Grant and Clive. My wife and he did a painting together, which they both signed. The drawing became one of our prized possessions and I’d often joke with Shirley if I could remove her name from it how it would be worth a lot of money…

I saw Michael again when he was visiting London much later and I did do some more work for him, again with Walter Scharf. We wrote some children’s songs for him, which he loved and apparently made demos of, but they never made the light of day.

I’d been born in Hackney, my real name is Blackstone, and had a happy childhood, the youngest of five. I’d started out in the music business as an office boy for the New Musical Express. I’d met various people through that, including Petula Clark and also the wonderful singer Matt Monro. My big break came in the 1960s when Matt asked me to manage his career. I wrote a song called Walk Away for him, which went to number two and my life as a lyricist began.

I won an Oscar when I penned the words of Born Free, the iconic film from 1966, and was thrilled to work with John Barry, the composer, on some Bond theme tunes. Thunderball, Diamonds Are Forever and The Man With The Golden Gun followed, as well two Bond songs later, with David Arnold.

It was John Barry who encouraged me to get into writing for musicals. I’ve been lucky to work with so many talented people like Trevor Nunn, Richard Eyre and the playwright Christopher Hampton, as well as Andrew Lloyd Webber. Writing with Andrew at the beginning, to follow Tim Rice and Evita and Jesus Christ Superstar was a bit daunting. But Tell Me On A Sunday was a hit and Aspects Of Love did well, as did Sunset Boulevard. We became very close friends. I’m godfather to his son, Alastair.

“If you doubled my salary when I left, which is about the same as my salary in parliament, I wouldn’t have been at the...
Read more

Steven Levy Digression: To me, Premium is the only rung worth talking about since the others, by dint of including fewer services, aren’t really worthy...
Read more

james_peskett@tracker.gg (James Peskett) The gaming superstar said that this was the most fun he has had on Fortnite for a long time. After his meteoric rise...
Read more