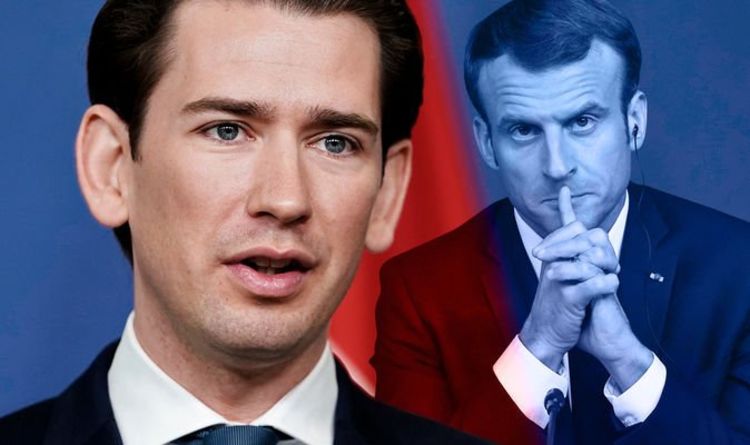 The Austrian chancellor wants his newly formed government to operate at the heart of Brussels’ decision making, and that involves dismantling Paris’ longstanding influence on the process. Ursula von der Leyen, the European Commission’s president, hosted him in the Belgian capitals to discuss Vienna’s future plans for the bloc. Mr Kurz, 33, said he wanted to “put an end to the French veto” in North Macedonia being offered accession talks.

In a brief press statement at the Commission’s Berlaymont headquarters, the young leader spoke of his country’s hope to bridge the gap between the Western Europe and the East.

He said: “We are grateful as a member state right in the centre of Europe.

“We’ve always had a good linkage and contacts with Eastern Europe – we try to do our share and to contribute to bridging the gap between the West and East in Europe, establish closer bonds and we would like to contribute to a strong European Union.

“We’re a small member state, but, of course, we want to be a very active member state and I look forward to your cooperation.”

President Emmanuel Macron last year vetoed opening membership talks with North Macedonia and Albania as part of an EU effort to move into the Western Balkans.

The French leader sparked controversy with his stance, with the likes of former EU chiefs Donald Tusk and Jean-Claude Juncker openly attacking the decision.

North Macedonia had hoped to win approval for membership talks after ending a 30-year dispute with Greece over its name.

Albania was asked to clean up its rule of law and fight against corruption before officially being put forward as an EU member.

Both countries were informed that they had a future as EU members in 2003, but years of internal conflict between member states of the rule of law has made some leaders rethink the bloc’s expansion policy.

Croatia, which holds the EU’s rotating six-month presidency, has also pledged to rekindle discussions over whether the bloc should expand its membership numbers in the wake of Brexit.

“We’d like to find a solution unblocking the process with Albania and North Macedonia by the time of the Zagreb summit,” prime minister Andrej Plenkovic told reporters last week.

“We have a chance to strengthen our influence in Europe and we feel responsible for supporting the European path of our neighbours in the region.”

Bystaronline@reachplc.com (Sofie Jackson) A man out fishing in Brazil got more than he bargained for when he hooked an alligator which moments later was attacked...
Read more
World

ByViolent flare ups were reported in the northern cities of Milan and Turin, where petrol bombs were hurled at police officers. More than a...
Read more
World

ByVanessa RomoIn this May 2020 file photo provided by Eli Lilly, a researcher tests possible COVID-19 antibodies in a laboratory in Indianapolis. On Monday,...
Read more
World