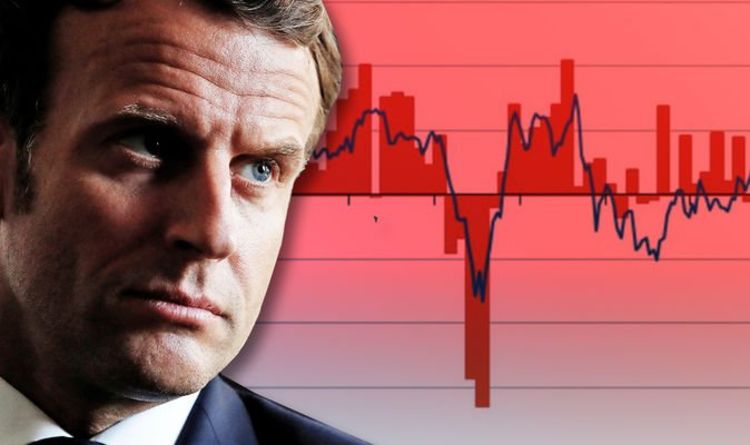 French President Emmanuel Macron is under pressure after shock data showed economic activity in the eurozone’s second largest economy was virtually halted by government-imposed lockdowns to stop the coronavirus pandemic. France’s IHS Markit’s Flash Composite Purchasing Managers’ Index (PMI) plunged to 11.2 from 28.9 in April, way below estimates of 24.5 – its lowest reading since the survey began in 1998.

The INSEE official statistics said the country-wide lockdown was still reducing economic activity in the eurozone’s second largest economy by 35 percent more than a month since it was imposed.

The figures come after Mr Macron insisted Brussels had “no choice” but to set up a rescue fund that allows member states to share the debt burden of their coronavirus pandemic with richer neighbours.

He has sided with Italy and Spain as EU members prepare to meet again today to discuss the bloc’s joint recovery package.

Meanwhile, French retailers were offered some relief today when the Government signalled it wanted them to reopen when a nationwide lockdown ends on May 11, though some curbs could remain in certain areas to delay a new wave of the coronavirus.

The government has ruled out restaurants, bars and cafes reopening straight after the lockdown is lifted, and Finance Minister Bruno Le Maire indicated restrictions were likely to remain in regions that have been hit worst by the virus.

But he told France Info radio: “We want all retailers to be able to open on May 11 in the same way out of fairness.”

France has suffered the world’s fourth-highest reported coronavirus death toll of more than 20,000, with more than 158,000 infections.

President Macron ordered the lockdown in mid-March to slow the spread of the virus, but the government has been working on a plan that would minimise the chances of France being hit by a second wave of coronavirus cases when it ends.

Public Health Authority chief Jerome Salomon warned that lifting the lockdown would depend on a substantial fall in the number of people sick and in intensive care.

He said: “France’s goal is not to create collective immunity by creating a second and then a third wave, that seems too dangerous to us.

“The goal is to prevent the circulation of the virus, and to create favourable conditions to gain time before the arrival of effective drugs or vaccines.”

Less than 10 percent of France’s 67 million population is expected to have contracted the virus by the end of the lockdown.

The government is also looking at limiting the movements of older people, who are more susceptible to contracting the virus, and the government has made clear that people “will not live as before” after the lockdown ends.

Companies have been told to encourage employees to continue working from home if they can, as this would limit the number of people using public transport.