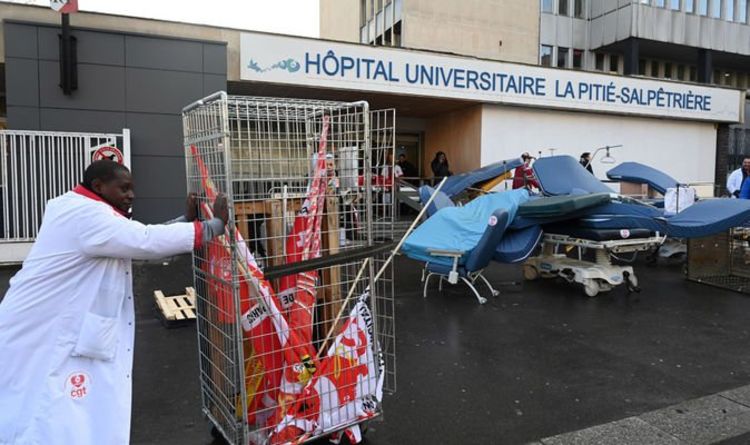 France’s state-owned SNCF railway company expects the travel chaos to continue until Christmas, an unnamed source warned, as unions prepare to step up protests in a bid to force Emmanuel Macron’s government to withdraw its controversial pension reform. A senior SNCF source told AFP on Friday: “A full service will not be restored by Christmas – that is simply unthinkable. Things won’t be catastrophic, but they won’t be great either. If the strike action ends on December 17 then Christmas is saved – if it does not end on the 17th, then we kill Christmas.

“It’s not a question of knowing whether trains will be running, but how many.”

France faces a decisive week in the bitter strike standoff between unions and the Macron government over the pension overhaul, amid ongoing uncertainty over whether millions will be stranded at Christmas.

Philippe Martinez, the leader of the hardline CGT union, told the news channel BFMTV on Sunday that the transport strike would end before Christmas if the government agreed to abandon its reform plan.

“Otherwise, the strikers will decide what they have to do Thursday or Friday,” he warned.

But, Budget Minister Gérald Darmanin, debating with M Martinez on the same programme, highlighted the unnecessary stress caused to those affected by the transport strike.

M Darmanin said: “The Republic cannot be subjected to blackmail by anyone. The government is not responsible for the transport chaos.”

Unions have called a third national day of protests on Tuesday against the reform.

They want the pension plan to be scrapped outright and the current system maintained.

They are hoping for a repeat of 1995 when they forced the conservative government to back down on pensions after three weeks of transport paralysis just before Christmas.

The Macron government said last week it would merge the county’s 42 separate pension schemes into a single, points-based system giving every pensioner the same rights for each euro contributed.

But, it has particularly irked unions by proposing a reduced payout for people who retire at the legal age of 62 instead of a new, so-called “pivot age” of 64.

The government has insisted the pension overhaul is necessary to make the current indebted system fairer, simpler and more sustainable.

In an interview with Le Parisien published on Sunday, Prime Minister Edouard Philippe said Christmas was an “important time” for the French, as he urged unions to end the “painful” strikes.