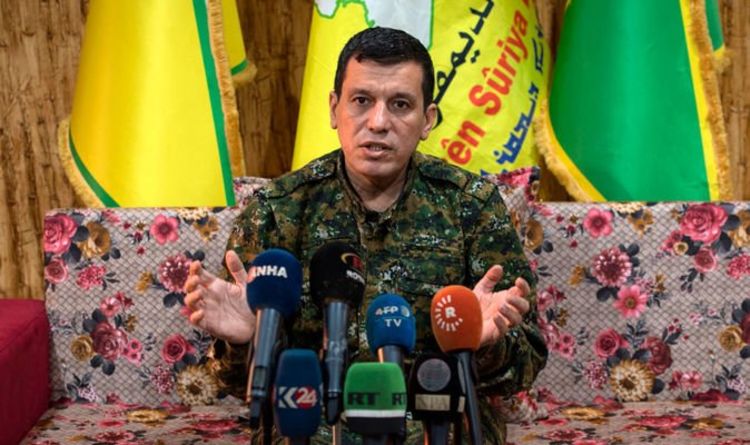 General Mazloum Kabani lashed out at the West for withdrawing from Syria, warning the actions meant the risk of a terror attack had substantially increased. He said: “The danger of the resurgence of ISIS is very big. And it’s a serious danger. “I think there are many people who don’t know this but it’s true. The Turkish aggression opened the space and provided hope for ISIS members.”

When asked about the prospect of another “spectacular” terror attack like the Manchester Arena bombing or the Paris Bataclan attack, he was blunt in his words.

He said: “This is possible. It’s one of the expected things that may happen in the future.”

He also spoke of the 5,000 ISIS fighters being held in Kurdish-run prisons.

“Yes, they pose a threat on other countries and they are extremely dangerous.”

He added that Turkey was now aiding the resurgence of ISIS.

One Turkish official told Reuters that the capture could lead to a crucial breakthrough in the form of intelligence.

He said: “We hope to gather a trove of intelligence from Baghdadi’s sister on the inner workings of ISIS.”

Information was scarce in the aftermath of the attack, with verification of the captured individual’s identity unattainable.

He said the raid represented “yet another example of the success of our counter-terrorism operations”.

Altun continued: “Our determination to bring justice to those who seek to terrorise our people and destabilise our region cannot be questioned.

“We have been leading in the fight against terrorism in all its forms.”

Turkish President Erdogan used the reported capture to call out US President Donald Trump, but did not give too much away about the raid itself.

He said on Wednesday: “The United States said Baghdadi killed himself in a tunnel. They started a communication campaign about this.

“But, I am announcing it here for the first time. We captured his wife and didn’t make a fuss like them.

“Similarly, we also captured his sister and brother in law in Syria.”