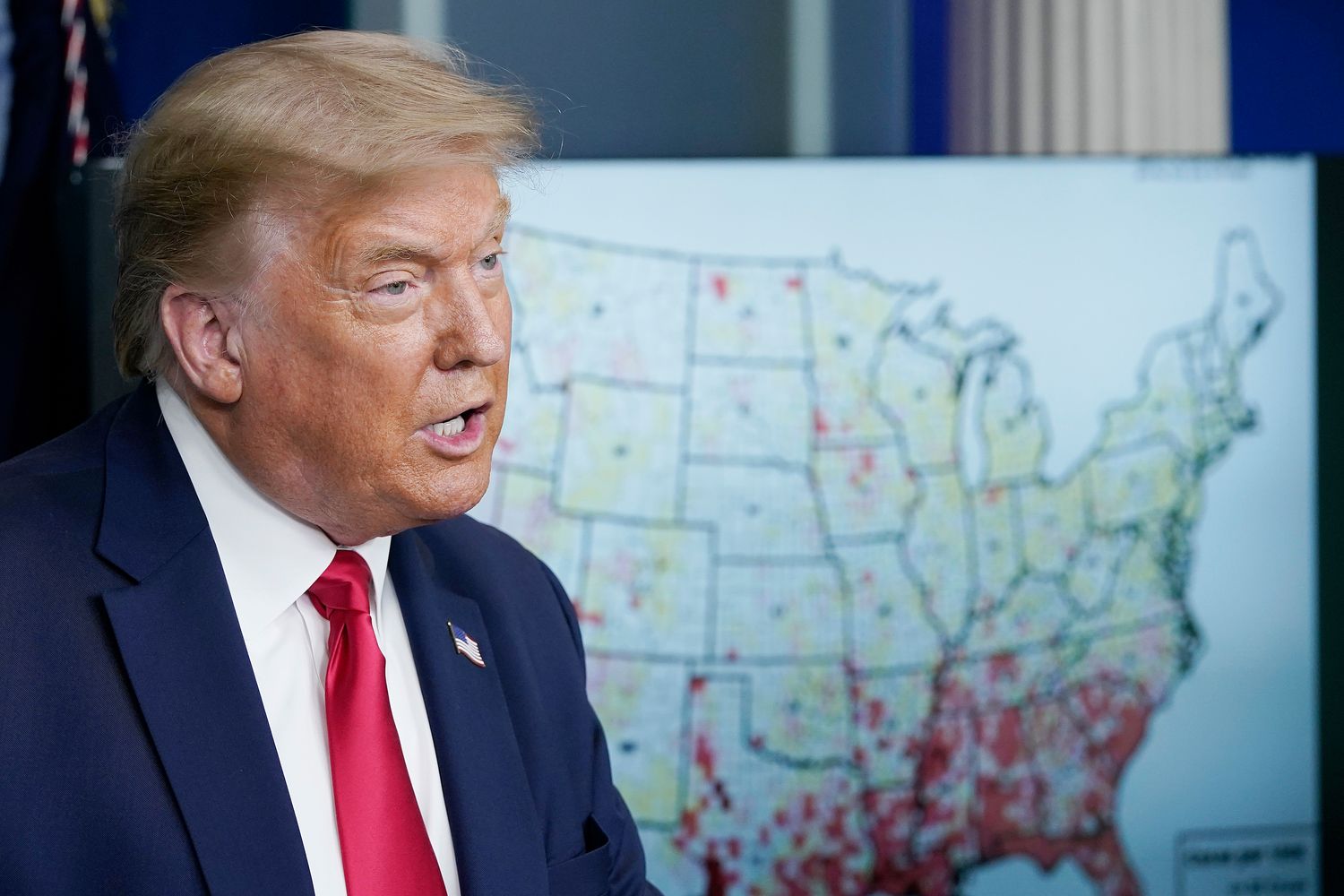 “The message has to be about the path forward,” said former House Speaker Newt Gingrich, a Trump ally.

For weeks, Trump had been doing anything but that. He demonized protesters. He crowed about mail-in voting fraud. He bragged — more than once — about the results of a cognitive test.

Then this week, Trump made more public attempts to change his focus. He spoke of plans to protect nursing home residents. He discussed an agreement to purchase potential coronavirus vaccines. He backed away from strident demands for the next economic relief package being hashed out on Capitol Hill.

Yet the president continued to offer contradictory messages, pushing again for schools to open in the fall, despite the concerns of public health officials. And he didn’t outline any specific plans for addressing complaints about the long wait for test results and the lack of contact tracing, one major key to curbing the spread of the disease. And he claimed that his administration had filled all its requests from states for supplies, though governors dispute that.

Scott Jennings, who worked for President George W. Bush and is close to the Trump White House, said partly in jest that Trump needs to change his motto from “Make America Great Again” to “Make America Normal Again.”

“He needs to talk about the future,” Jennings said. “He needs to give people the plan that will return us to normalcy.”

With just 100 days before the election, as the pandemic kills 1,000 Americans a day, Trump is lagging behind presumptive Democratic nominee Joe Biden in most national polls and battleground states. His standing has even fallen in traditionally red states, including Arizona and Georgia.

Much of the steady decline can be attributed to his handling of the coronavirus — recent surveys show about two-thirds of Americans disapprove of his efforts. In Florida, a state reeling from a coronavirus surge, a new poll shows Biden with a 13-point lead over Trump.

At the start of 2020, Republicans were increasingly confident Trump could win reelection on the back of historic low unemployment and a positive economic outlook. But after the pandemic hit and the economy tanked, they fear Trump might not win unless he can get the country out from underneath the virus and focus on Biden.

Biden — who has largely remained at his Delaware home conducting online events — has tried to make the race a referendum on Trump’s response to the coronavirus, which has overtaken American life, shuttering business and schools and forcing millions of people into their homes.

“It didn’t have to be this bad,” Biden said in a statement Thursday when the U.S. passed 4 million cases. “Instead of the wartime president we were promised, America is led by someone even his own aides and allies describe as ‘bored’ and ‘distracted’ by the fight against this virus.”

Biden’s allies have picked up on the theme. Just this week, House Speaker Nancy Pelosi started calling the disease “the Trump virus.”

Trump, who continues to heap praise on his administration for its “tremendous job” handling the virus, told reporters that he knows he will be judged in November on his response to the pandemic but insisted voters will also consider other accomplishments, which he listed as growing the economy and increasing military funding.

Trump tried to change his own pandemic narrative this week. In three successive evening news conferences, Trump mostly kept to his notes, used a more somber tone — by his standards, that is — and quickly sped through questions before departing. It was a marked difference from the rambling briefings Trump held this spring, where he held court daily, sometimes for more than two hours, offering erroneous health claims, misrepresenting his administration’s work on the pandemic and pontificating on any subject that happened to cross his mind.

The president is also refocusing his upcoming travel on the pandemic, traveling to North Carolina next week to visit a company involved in a potential vaccine.

“You’re seeing an evolution of a realization of the reality of what’s going on and I believe he’s adjusting to that right now and acting accordingly,” said Anthony Fauci, director of the National Institute of Allergy and Infectious Diseases, during a Fox News interview on Friday. “So you know, I’m very, in many respects, positively responding to that because that’ll set a good example for the rest of the country.”

Still, Trump reiterated his claim the coronavirus will eventually disappear and indicated he was still developing a recovery strategy six months after the first Covid-19 case was detected in the U.S.

“We are in the process of developing a strategy that’s going to be very, very powerful,” he told reporters Tuesday.

“The fact that he can’t or won’t talk about it is a symptom of the problem and not the underlying problem that he has no plan to deal with the underlying health crisis,” said Michael Steel, a Republican strategist and frequent Trump critic who worked for 2016 presidential candidate Jeb Bush. “Hope is not a strategy.”

And Trump did veer off topic as the week went on — claiming without evidence that the nationwide protests had contributed to the surge in cases and that the border wall with Mexico had helped prevent an even greater surge. He also continued his typical Twitter commentary about everything from the criminal charges against a MAGA celebrity, to Michael Flynn, to the ways Biden will destroy neighborhoods for “suburban housewives.”

A former White House official said Trump has a strong political sense of what he should talk about, which helped him win the presidency in 2016 when few thought he would.

“He’s always trusted his gut and his gut has always gotten him further than what anyone else thinks,” the former official said.