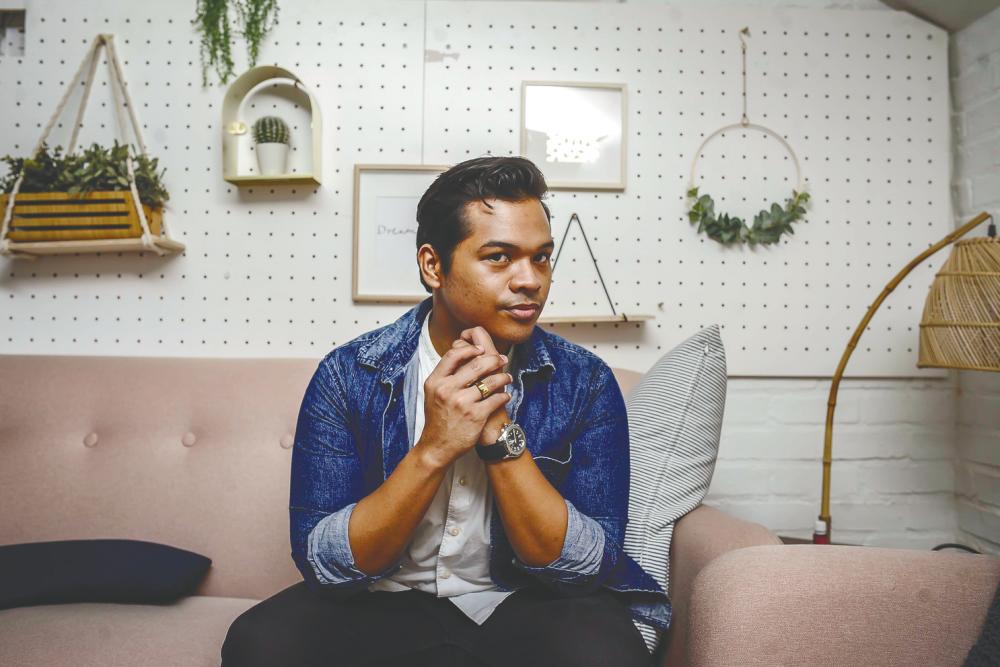 LIKE many of us who watch or read about conflict, great suffering and great injustice across the world, Aizat Amdan was moved emotionally.

However, unlike most of us, Aizat decided to lend a helping hand. Last year alone he made several trips to the Middle East, and on one occasion even donated several goats to people in a refugee camp in Jordan who were observing Eid al-Adha (Hari Raya Korban).

The Malaysian singer-songwriter, known for hits such as Hanya Kau Yang Mampu, said: “I was exposed to [the humanitarian tragedy], like everybody else – through the news, reading the newspapers.

“[I was most affected by] an incident in Gaza where the Israeli army bombed the city at a time when the streets were most crowded, and parents were picking up their kids from school (known as the 2009 Al-Fakhura school incident). It really affected me.”

At the time of this horrific incident. Aizat was riding high in his career, winning many prestigious awards including Anugerah Planet Music.

“Hearing the news about children dying and mothers being killed, it really hit me hard.” He felt a sense of helplessness because he could not do anything to help them.

Brought up by parents who are lawyers, Aizat and his six siblings were always encouraged to do something that mattered.

“Despite doing well in my career, I felt empty because it (the atrocities) were still happening.”

However, his life changed when he performed at a charity concert called 1 Moment For Them in Jordan in 2015 with other Malaysian artistes such as Faizal Tahir, Mizz Nina and Mu’adz Dzulkefly.

One of the organisers, Fatiha Shuib, took them to a Syrian refugee camp. Fatiha had once studied in Jordan and was very familiar with the situation there.

At the camp, Aizat saw firsthand the conditions these refugees had to live in, and what they had to endure daily.

“It was my first trip to Jordan,” said Aizat, who was initially excited by the trip which he viewed as a vacation to an exotic place.

“When I got there, it was a whole different reality … They did not have any basic necessities, their home was just a basic cloth tent, and it was really hot at that time.

“We were with this other group of people, who were studying in Jordan and who helped these refugees in their spare time.”

Aizat said the experience was an eye-opener for him, and that he was also moved by the warmth he received from the refugees.

One of the camp leaders whom Aizat spoke to used to be an affluent person who lost everything due to the Syrian conflict. When Aizat asked him where he used to live, the man pointed towards the border and said: ‘90km away’.

“I remember how the camp had no toilets, and they had to walk one kilometre just to get water. You would notice at these camps that there are a lot of little children. Some of them were born there.”

While there Aizat, along with the other volunteers, taught the children how to brush their teeth and how to shampoo their hair.

“Looking back I think it was just us being there for them. They are human beings and deserve the same rights as other human beings.”

When Aizat returned to the country the following year for another concert, he was told that a lot of changes had taken place at the camp he visited.

“They had built brick homes and toilets with the funds we had collected. You can see that their morale was up.”

He said it was still sad to note the number of children who grew up against the backdrop of war.

He was also able to meet Musa Al-Nuwayri (founder of the NGO Cinta Syria Malaysia), with whom he has become closely associated.

CSM has opened schools for refugees in Turkey, Jordan and Malaysia (located in Bangi). “They have not only helped refugees from Syria, but also from other countries.”

Aizat has helped out in community projects such as soup kitchens, and even raised awareness of the plight of stateless people in Sabah. He is also active in efforts aimed at protecting the environment.

“I believe you should love not just yourself, but your neighbours as well. If they are in trouble, it is your obligation to help them as well.

“You can’t have a decent life at these camps. You don’t know when you next meal is going to come. You can’t stay in one place. You are always on the move. Even if another country takes you in, you will always be moving. There are a lot of restrictions if you are a refugee. It is really hard.”

Aizat said that speaking to refugees and learning about their situation also struck fear in him. “Syria was a country that was once stable, just like ours.”

He pointed out that at distribution centres where you donate clothes and food, you will notice that many of these people look like they once lived privileged lives and seem lost in their current situation.

“It was an eye-opener for me. It could happen to us if we are not careful, grateful or thankful enough. I do not want to go into the political spectrum of it. I don’t like politics. I just like the fact that we can help, and it is a reflection of how much I have to be thankful for.”