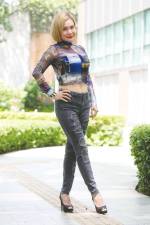 ACTRESS, model, brand spokesperson, entrepreneur and even public speaker Lavin Seow has worn many hats over the years, and she has no plans to slow down even after 25 years in the entertainment industry.

During a recent interview, Seow – who was raised and went to school in Penang – told us how she started her career as a performer at age five.

“I was trained in ballet, and every year I would have to perform a dance for the school. I also took part in competitions.”

After high school, Seow came to Kuala Lumpur to pursue her higher education but as fate would have it, she crossed paths with producers from the local production company HVD who asked if she wanted to be an actress.

She recalled: “I told them I loved to perform but I did not know how to act. They said don’t worry about it, we have acting classes.”

There was also a considerable language barrier.

“In Penang we spoke in Hokkien. Now I had to learn Cantonese.”

HVD did a lot of collaborations with Hong Kong production houses and since Cantonese was the language used, Seow had to master it.

“I [have always enjoyed] a challenge since I was young, and so I took[it up].”

After about a year of training as an actor, Seow did a lot of gigs as an extra, and when her star began to rise, HVD put her in major productions that were shot in China, Hong Kong and Taiwan.

Eventually she managed to land roles in acclaimed series including The Meaning of Love and the renowned 1998 TV series Xin Shuihu Houzhuan (Water Margin) which starred action hero Wu Jing.

Seow worked with HVD for more that seven years, before moving on to other production companies. For the past 10 years she has been working with Singapore’s MediaCorp.

In 2017, Seow starred in the local Mandarin-language TV drama series My Sensei Nyonya.

Asked if she had ever felt like throwing in the towel before she hit the big time, Seow said: “When I started my career I thought it was insane that it took Chow Yun Fatt years to become famous.

“But in the blink of an eye, I have been in the industry for almost 26 years.”

She says she feels blessed and thankful for all the opportunities that came her way.

This mother of four boys (aged between five and 16) thanks her family for helping her balance both her career and motherhood. She says her mother and husband are a huge help.

Seow also admitted that she is not very active on social media.

“I am a traditional, old-fashioned artiste,” she said. “I am not a blogger or influencer. It took a long time to build my [brand], but now there are so many people out there who have so many followers.

“I don’t really know how to manage all the accounts. I am still used to doing things the old-fashioned way.”

Six months ago, Seow decided to open her own restaurant in Bukit Jalil, and has been busy with that. She is also planning to start her own production company.

When asked if Malaysia can ever produce a film of the same calibre as recent Academy Award best picture winner Parasite, Seow said: “I think there is a lot of talent in Malaysia, not only [among] the artistes. Even those who work behind the scenes, like the camera crew, are very talented.”

She pointed out the biggest problem facing the industry is that not many people are willing to invest in the local entertainment scene.

“When you have the budget, naturally everything will come out nice, we can’t compare ourselves to Singapore and Hong Kong productions.”

Despite doing so many things, including giving talks in schools, Seow said: “My dream is to produce my own movies. I see myself evolving as an actress and playing different types of roles as I get older.”