Malaysia through the movies 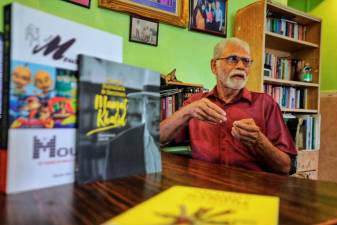 ON AUG 31, we will be celebrating our 63rd Independence Day. To honour this pivotal moment in our nation’s history, theSun asked renowned film scholar, critic and author Hassan Muthalib to pick six local films that reflect the Malaysian spirit.

To date Hassan has written three books on the Malaysian film industry including Malaysian Cinema in a Bottle, Mouse Deer to Mouse, 70 years of Malaysian Animation and Cherita Sutradara & Seniman Mamat Khaild.

He had three criteria for selecting these films. The films had to be entertaining, reflect the society that we live in, and touch upon the diverse cultures of our society.

Now let us look at his choices.

In the busy bustling city of Kuala Lumpur, an unlikely bond forms between a dejected guitarist and a young woman who is trapped in an unhappy marriage.

Hassan’s comment: “The film powerfully depicts the similarities between the male protagonist and the city he lives. in The city can be cold and impersonal, and is shown mostly devoid of trees. The movie opens with aerial shots of the awe-inspiring, glittering Twin Towers, but the events that the characters go through in the film are not as inspiring.”

A recent graduate attends an interview in the hopes of getting a job. But everything goes wrong for him, and he is caught between despair and disappointment.

Hassan’s comment: “Namron dares to show the situation that graduates face in our society and the effects of nepotism. We are always told that there is no shortcut to success, but is that true?”

The third instalment of the Rock film series tells how rock group Rimba Bara continues to struggle in a music industry fraught with politicking.

Hassan’s comment: “Malaysia’s complex music scene is presented through the eyes of rockers, with the director delivering sarcastic observations about society and the music industry.”

The film is loosely inspired by the real-life Malaysian national football team which successfully qualified for the 1980 Olympics.

Hassan’s comment: “This film was entertaining, yet offers a critical view of us as a society. In the film, there is a reporter who wants to migrate to search for better opportunities. But later, she changes her mind. She feels her place is in this country.”

After her party loses in the general election, an ambitious young politician helps to plot a political comeback, and is willing to do whatever it takes to win.

Hassan’s comment: “The political scenario has changed drastically over time. These days the politicians are in this profession for themselves, the interest of the nation comes second. Greed has taken over.”

A music teacher is preparing for an inter-school talent contest, which sparks rivalries and leads to relationships between the students.

Hassan’s comment: “This is a very spiritual film. Yasmin is telling us that we are all spiritual by nature, and how some of us have lost our spirituality and need to get it back.”