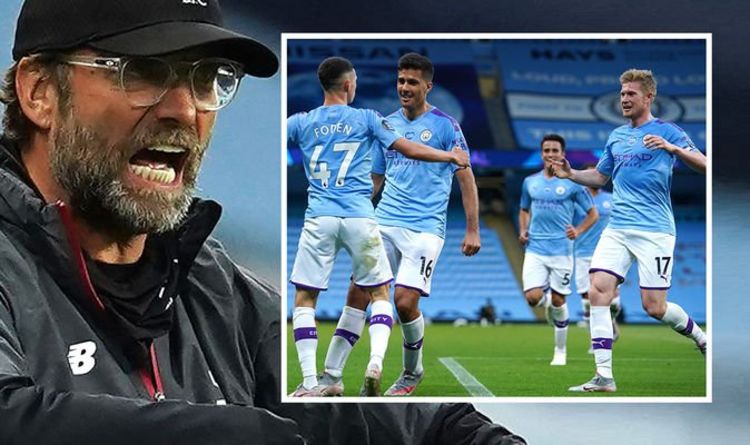 Manchester City provided a guard of honour for Liverpool as promised then followed it with a reminder that no such respect will be afforded next season. Just a week after lifting a first title in 30 years when City were beaten at Stamford Bridge, newly crowned Premier League champions Liverpool were humbled by Pep Guardiola’s side.

It was an uncharacteristically lethargic performance full of fluffed chances and heavy legs, one where their standards dropped way below the stratospheric levels they have maintained this season.

Yet it was also one which suggested City – particularly in the axis between Kevin De Bruyne and Phil Foden – have the raw materials to be the biggest challenge to Liverpool retaining the title next year.

De Bruyne challenged geometry all night, orchestrating all of City’s best moves and opening the scoring from the penalty spot.

And perhaps most exciting of all, Foden, who provided another edge of the seat performance which really deserved fans.

This was the sort of heavy metal assault that Klopp has prided his teams on – their biggest defeat of the season and their biggest since losing 5-0 here in September 2017.

Neither manager picked a side that offered a hiding place in the event of defeat.

Klopp picked pretty much his strongest XI – the one which had thrashed Crystal Palace 4-0 last week. Guardiola made four changes to the side which beat Newcastle in the FA Cup, but certainly not to weaken it.

Eric Garcia got another chance to prove to Guardiola he has a viable centre half option under his nose for the toughest stages next season.

The argument for Foden’s place in future plans is already won, but he kept David Silva, Riyad Mahrez and Bernardo on the bench. It said something that after City’s third goal he had the three of them on their feet applauding.

The Liverpool striker tested Ederson after four minutes and slammed a shot against his left hand post after gliding inside Garcia a little too easily on 20 minutes.

Yet City were energised by the first drinks break and never looked back.

Sterling and Gomez have a bit of form for grappling with the pair famously coming to blows in the St George’s Park canteen on England duty last November.

Last night Gomez was at it again after 25 minutes, eventually wrestling a wriggling Sterling to the ground inside the penalty area to give away a penalty which De Bruyne despatched.

Ten minutes later Foden got a perfectly waited pass to Sterling on the left side of the area. Taking one touch, the City man cut inside Gomez before hitting the ball through his legs for a second.

On the stroke of half time City produced a third and it was a thing of beauty with Gundogan cutting across from the left to feed Foden who exchanged a razor sharp give and go with De Bruyne before slamming the ball high past Alisson.

This was no way to treat champions but City were clearly feeling the same way.