Man for all genres 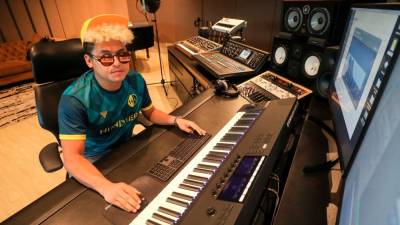 BO AMIR IQRAM is a prolific producer, DJ, composer and singer-songwriter who has been making sweet music for over a decade.

He used many different aliases over the years, such as Mr. Fluff, RECovery (MY), Chopstah! and CosmicSpaceMunkys, but currently goes by Cuurley.

The different aliases were all due to the different types of music he was producing at the time. Now that he has established himself as an all-rounder when it comes to music, he is sticking to Cuurley.

Among the artistes whom he has produced tracks for are Elizabeth Tan, Talitha Tan, Hunny Madu, Resh, Namewee and Sophia Andersen.

His ability to play different musical instruments and his affinity to create music for different genres makes him among the most sought after producers and composers around.

Describing how it all began for him, Cuurley said: “Initially I just wanted to play with my jazz rock band Seven when I was 17 years old.

“The idea to make music hit me when I was 16, and I realised playing music with other people was way more fun. I started a band with my schoolmates and we took part in battle of the bands [competitions], played for family days, camping days and everything.”

He was also creating his own electronica music at home. He became friends with DJ Joey G and that is where they started a DJ duo called CosmicSpaceMunkys.

They even got to travel all the way to the United Kingdom, where they attended a masterclass with Paul Epworth, the man who produced Adele’s award-winning 25 album.

Epworth was working on English rock band Bloc Party’s album at that time.

“That is when I realised I wanted to become a music producer at age 20,” Cuurley said.

“From then on I was intrigued with different kinds of genres. Instead of just sticking to rock, I ended up becoming a DJ playing more jazzy stuff, learning what was funky. It just went on.”

Having worked with a wide variety of artistes, it makes you wonder how much he has had to give up to create something that suits them.

“I wouldn’t say I was giving up anything. In fact, I end up getting a lot more.

“It varies. It could be a beat that they started or a hook that I started, or a completely new song that I wrote.”

As to adjusting to the styles of different artistes, Cuurley said it depends on what they are singing.

“A person can be a master of something, but I prefer to be a jack-of-all-trades.”

The local music industry used to churn out artistes and music based on what was popular at the moment. With the advent of digital technology, so many different styles, genres and artistes are able to exist side-by-side in the local music ecosystem.

He personally prefers not labelling artistes according to their genre.

Some artistes have thrived despite the movement restrictions in March this year, while other have struggled. “We had to pretty much adapt to everything. You have to have brilliant survival skills to adapt.”

He said the lockdown gave him more time to do what he wanted.

“I felt that the first six weeks was the best time for me, because I could do 25 to 30 songs.”

Personally, Cuurley was happy to be able to spend more time with his wife and his children.