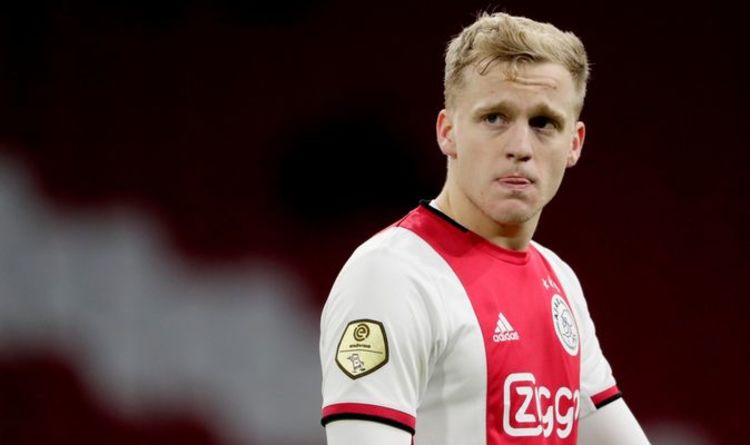 Manchester United have reached an agreement to sign Donny van de Beek from Ajax in a deal worth around £40million, according to reports. The club are said to have been in talks with the player for several weeks over a move which is now set to go ahead. Ole Gunnar Solskjaer is looking to bolster his midfield options and the Dutchman already has a wealth of experience at the ripe age of 23.

Van de Beek has been given the green light to leave Ajax this summer after he stayed an additonal year at the club following interest from Real Madrid.

He was a key figure in Ajax’s sensational run to the Champions League semi-finals in 2018/19, netting in the 1-0 first-leg win at Tottenham.

It wasn’t to be though for the Dutch giants though following Lucas Moura’s dramatic last-gasp winner and it now appears Spurs launched a late raid to snatch a deal for Van de Beek.

Howvever, now the player is set to join Manchester United, according to The Mirror with an agreement now in place with Ajax over a summer transfer.

United’s chief negotiator Matt Judge reportedly hurried to complete the deal after he was informed that Spurs had registered an interest.

Reports in Spain had claimed that Ronald Koeman was looking to reunite with his former player in Catalonia following his appointment at Barcelona.

It appears that Koeman would instead prefer to bring Liverpool midfielder Gini Wijnaldum to the Camp Nou.

Van de Beek is expected to arrive in England next week to complete his move and undergo a medical.

So far, United’s transfer business has not gone entirely to plan. The club have gone quiet on a deal for Jadon Sancho after being priced out of a move by Borussia Dortmund.

David Brooks is seen as a potential alternative but Solskjaer has instead addressed a gap in his midfield and looks set to have Van de Beek on board in time for the start of the new season.

United still want a left-footed centre-back as well as right-forward before the October deadline but Solskjaer had made clear he wants deals done sooner rather than later.

This though is indeed a start but any move for Jack Grealish now looks unlikely particuarly with Aston Villa playing hardball.