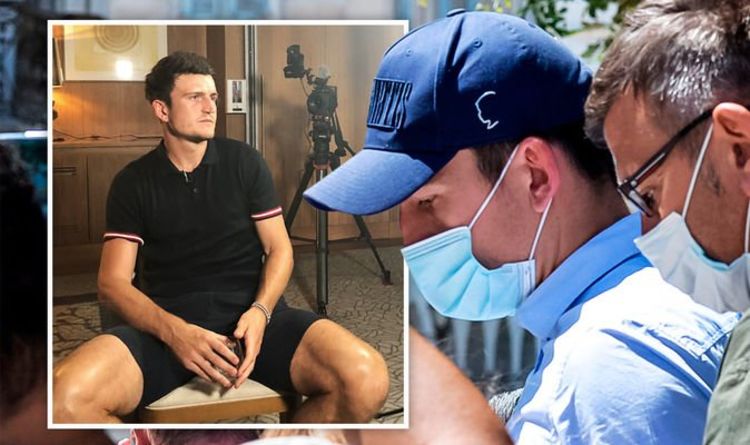 Manchester United captain Harry Maguire insists he did “nothing wrong” and admits he feared for his life when he was arrested by Greek police last week. Maguire was arrested alongside brother Joe, 28, and friend Christopher Sharman, 29, after an alleged fight with the authorities.

Maguire was found guilty of aggravated assault, resisting arrest, and repeated attempts of bribery in Syros on Tuesday after the incident on the Greek island of Mykonos.

The England defender was given a suspended jail sentence of 21 months and 10 days but he maintained his innocence, saying: “Following the hearing, I have instructed my legal team with immediate effect to inform the courts we will be appealing.

“I remain strong and confident regarding our innocence in this matter – if anything myself, family and friends are the victims.”

The player’s appeal against the verdict on Wednesday has been accepted and a full retrial will be conducted in a more senior court, in accordance with Greek law.

The appeal nullifies Maguire’s conviction and speaking for the first time publicly since spending two nights in custody, the 27-year-old – visibly shaken – admitted he was in complete panic and sought to run away from the plain-clothed officers, who he claims did not identify themselves.

In an exclusive interview with BBC News, an emotional Maguire said: “These two men approached my little sister [Daisy Maguire], they asked her where she was from, she responded.

“Then my fiancee Fern [Hawkins] saw my little sister’s eyes go into the back of their head and she ran over and she was fainting, she was in and out of consciousness.”

He added: “It was horrible, it’s not something I ever want to do again, I don’t wish it on anybody.

“It’s the first time I’ve ever been inside a prison. I don’t feel like I owe an apology to anybody. An apology is something when you’ve done something wrong.

“Do I regret it? I regret being in the situation, obviously the situation has made it difficult. I play for one of the biggest clubs in the world so I regret putting the fans and the club through this.

“I think it could’ve happened anywhere. I love Greece, I think us footballers get a bit of stick for trying to stay away from everything and the public eye. It’s not how I want to live my life.

“I did nothing wrong. I found myself in a situation where it could have happened to anybody and anywhere.”

Maguire says he got into a taxi and asked to be taken to a hospital to check his sister was okay but was instead taken to a police station, which they were attacked outside of.

“My initial thought was that I thought we were getting kidnapped. We got down on our knees and put our hands in the air,” he continued.

“Then they started hitting us, they were hitting my legs saying my career’s over and, ‘No more football, you won’t play again’.”

Maguire, who says that his “conscience is clear”, added that he attempted to run away from the officers while he had one hand in handcuffs because he did not know who they were.

He denies throwing any punches at the men.

“At this point I thought there was no chance they were police, I don’t know who they are, so I tried to run away,” he said.