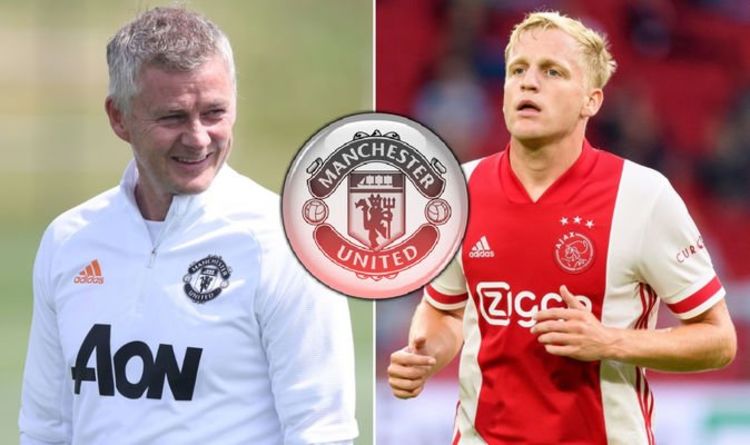 Manchester United are poised to complete the signing of Donny van de Beek imminently, having agreed a deal worth around £40million to snap up the Ajax midfielder. The Dutchman has passed a medical and agreed personal terms on Monday over a move to Old Trafford.

Van de Beek, 23, will become United’s first signing of the summer once the final paperwork is completed and submitted.

After discussions with Borussia Dortmund over Jadon Sancho slowed, Ole Gunnar Solskjaer has moved to strengthen other areas of his squad.

He wanted another addition in attacking midfield, where Van de Beek has shone in the Eredivisie in recent campaigns, and went off Aston Villa’s Jack Grealish due to his huge price tag.

And once the acquisition of Netherlands international Van de Beek, who almost joined Real Madrid a year ago, is all wrapped up United will then turn their attention to other targets.

A central defender is thought to be on the agenda, with RB Leipzig’s Dayot Upamecano a long-standing target for the Red Devils much like Van de Beek.

And transfer expert Fabrizio Romano says United are working on bringing in a new centre-half, but only provided an opportunity presents itself to sign a player.

He also added that Roma will return with a fresh offer for Chris Smalling, who spent the season on loan with the Serie A club last year.

Romano tweeted: “Manchester United expect to receive a new bid soon from AS Roma to sell Chris Smalling on a permanent deal.

“Man Utd board are also working to sign a new CB if a ‘good opportunity’ will be on the market on next weeks. #MUFC #ManUtd.”

Smalling is keen on the idea of a return to Italy and selling the 30-year-old would free up funds and space in the squad to sign a player like Upamecano.

But United have rejected offers from Roma earlier this summer as they reportedly demand a fee of around £18m in return for the 31-cap England international.

Yet Roma, who on Monday secured the permanent addition of former United attacker Henrikh Mkhitaryan after Arsenal ripped up his contract by mutual consent, are refusing to give up on Smalling.

With Smalling surely headed for the exit door, ESPN say Upamecano is a priority target for Solskjaer as he looks for another centre-back to take Victor Lindelof’s place alongside captain Harry Maguire.

Upamecano, 21, has long been linked to Arsenal and showed his quality in Leipzig’s Champions League run last term.

The German side reached the semi-finals before losing to Paris Saint-Germain, with the French defender’s classy displays catching the eye.

The France under-21 international only recently signed a contract extension at the Red Bull Arena to keep him with Julian Nagelsmann’s men until June 2023.

His previous deal had been set to run out in 2021, with a flurry of clubs having been expected to launch a move for him this summer prior to the coronavirus pandemic.

Upamecano’s new deal does include a release clause of an affordable £37.4m (€42m) but it is not active until the end of the new season.

But Solskjaer would reportedly prefer to land the player this summer as United look to bridge the gap to Liverpool and Manchester City at the top of the Premier League table.

ESPN add that in addition to Smalling, Marcos Rojo and Phil Jones are likely to leave the club this summer while there are doubts over Eric Bailly and Lindelof’s reliability.

Solskjaer is also said to harbour concerns around promising young defender Axel Tuanzebe’s fitness record, with Upamecano seen as the man who can help truly solidify the United back-line as they go in search of a first league title since 2013.