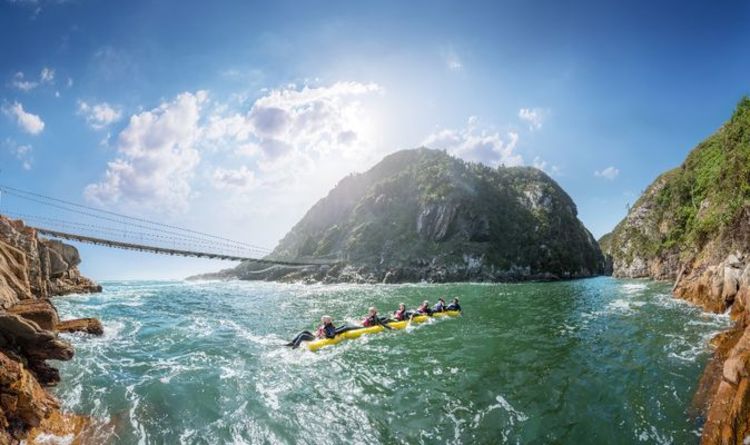 This park is in the eastern Free State province, on the northern border of landlocked Lesotho and in the foothills of the mighty Maluti mountain range, which forms part of the 600-mile long Drakensberg escarpment.

There are several species of antelope and many smaller beasties, but you’re not here for the wildlife, you’re here for the dramatic golden sandstone formations which hide caves filled with San rock art and dinosaur fossils.

Stay at the Golden Gate Hotel for full-service luxury, or self-cater at the Basotho Cultural Village Rest Camp, built in the style of an 18th-century Basotho village.You can even go on a herbal walk with a traditional village healer.

Nearby activities include golf, white water rafting, quad biking, ziplining, fly fishing – and in winter you can even go skiing! The nearby town of Clarens is very pretty and arty.

This remote park is in the pointy bit between neighbouring Namibia and Botswana – in fact two-thirds of this 15,000 square mile desert reserve is in Botswana. Just one glimpse of the golden sand dunes and dry, red, scrubby landscape will tell you why the park’s name translates as “place of thirst”in the local Tswana language.

This is home to the fabled black-maned lion and the iconic desert oryx – known as gemsbok. There are also cheetah, leopard, hyena, wild dogs, giraffe and antelope that survive in these arid conditions. There are three main rest camps and several wilderness camps – 4×4 vehicles are recommended for self-drivers, and you can join the 185-mile four-day Nossob eco-trail.This is a place of extremes – summer temperatures can reach 45°C and in winter it can hit -10C.

The stars of this park are the stars. With very little light pollution you can see the MilkyWay like you’ve never seen it before.

This 300-square mile wilderness is in the middle of the vast Karoo semi-desert, where you can drive for miles and see only big blue skies, red baked earth, sparse scrubs, low kopjes (hills) and creaking windmills serving sheep farms (Karoo lamb is spectacular).

The main motorway – the N1 – which stretches 900 miles from Cape Town to Johannesburg cuts through this wilderness.

There are plenty of antelope – red hartebeest, eland, kudu and springbok – as well as rhino, baboon and zebra, and predators like bat-eared fox, brown hyena and genets.

Stay in Cape Vidal which has an abundance of marine and bird life, as well as endangered samango monkeys. Depending on the time of year, you’ll find humpback whale, whale shark, marlin, dolphin and sea turtles, which nest on the beaches here. Inland lie bigger reserves with big game – black and white rhino, elephant, crocs and hippo.

The coast here is perfect for rockpooling and snorkelling – there’s even a shipwreck to explore.There are miles of unspoiled beaches and rolling sand dunes, and you can go ski-boat and surf fishing.There are groovy self-catering log cabins to stay in, or you can rough it at the campsite.

South Africa’s third-biggest park is one of the friendliest – and that includes the ellies! This is the place if you want a plethora of pachyderms.

It’s a Big 5 reserve, so expect buffalo, rhino, lion and, if you’re very lucky, leopard. There are also hyenas, blackbacked jackal, warthog, and antelope such as red hartebeest, eland, kudu and bushbuck.

Dung beetles have right of way here, so watch out for them as they go about their… business. There is one main rest camp, which has a pool, petrol station, well-stocked shop, spa and a lovely restaurant, as well as an interesting little museum.Available accommodation ranges from camping and basic chalets to luxury cottages.There are several smaller bush camps and private lodges dotted about the park.

This might be one of the smallest of the country’s parks, but it has a unique selling point… here you can stand on the southernmost tip of Africa and see where the Indian and Atlantic Oceans collide.

A photo of you straddling the cairn which marks the spot is an Insta-must.Visit the Cape Agulhas lighthouse which stands guard over a rocky coastline littered with shipwrecks.

Bird enthusiasts can try to spot the endangered African black oystercatcher, and between June and September, keep your eyes peeled for southern right whales as they backflip by.

This is an easy detour on a road trip, but if you want to stay, there are a few options inside the park, and the popular seaside resort of Struisbaai next door has plenty of B&Bs and restaurants.

This sprawling reserve on the glorious Garden Route – one of the most famous drives in the world – is made up of three sections: Wilderness, Knysna Lakes and Tsitsikamma. They encompass beautiful beaches and wetlands, kayaking and adrenaline-fuelled adventures, dramatic gorges, and spectacular hiking and mountain-biking trails through ancient forests and across jagged coastlines.

There are plenty of towns in the area, including the wonderful Knysna, which sits on a lovely lagoon spilling out to sea. There are thousands of accommodation options in and around the parks – a top tip is a wooden chalet right on the seafront at Storms River Mouth in the Tsitsikamma section.