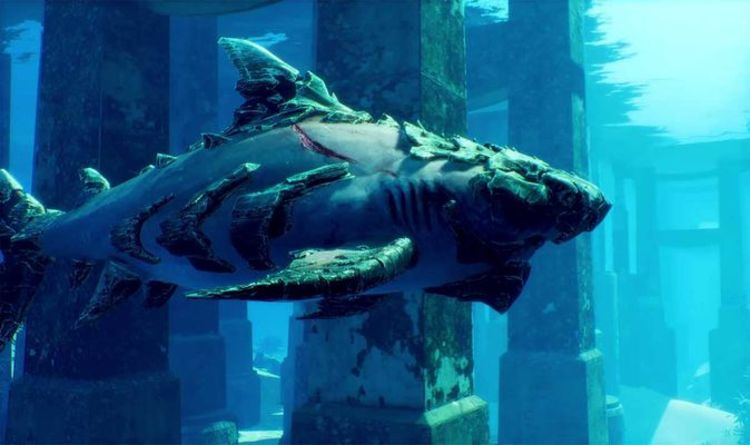 Shark fans don’t have much longer to wait before they can get back into the water. The Maneater release date has been set for Friday, May 22, 2020, and promises a chomping good time for all. The game is the classic revenge story, and you’re out for revenge, the only way you know how; by gobbling everything in your patch. “Starting off as a shark pup, you are put forth into an aquatic world based around the gulf coast of the southern United States,” the official Maneater description explains.

“Your mission is to eat, grow, and evolve as you explore this world and hunt down the man who killed your mother in an epic aquatic RPG adventure.

“Decide if you are a stealthy predator, or perhaps the biggest apex predator in the Gulf of Mexico.

“Eat, Grow and Evolve to your playstyle! But be careful, as you reap more destruction along the coast, foes will appear to sink your ambition of revenge.”

You start your adventure as a small shark, taking on the small fry before growing into an absolute unit of a carnivore.

This means unlocking new abilities and making yourself harder to harpoon by those Bounty Hunters who want to end your run of terror.

And the good news is that we now know the Maneater release time schedule for PS4, Xbox One and PC.

WHEN IS THE MANEATER RELEASE TIME ON PS4, XBOX ONE AND PC?

The game is also being released on the Nintendo Switch, however, this will be happening later this year.

It should also be noted that Maneater is available to purchase from the Epic Games Store but won’t be released on Steam until 2021.

Tripwire Interactive has also confirmed that no digital pre-orders are available for PS4, meaning you have to wait until May 22 to buy the game.

The Maneater release time schedule is as follows:

- Advertisement -
- Advertisement -
Facebook
Twitter
Pinterest
WhatsApp
Linkedin
ReddIt
Email
Tumblr
VK
Previous articleAlex Jones throws The One Show into chaos after injuring herself: 'I'm so sorry!'
Next articleComet SWAN: How to see the 'brightest' comet of the year in the UK