Marco Rubio finds his next act 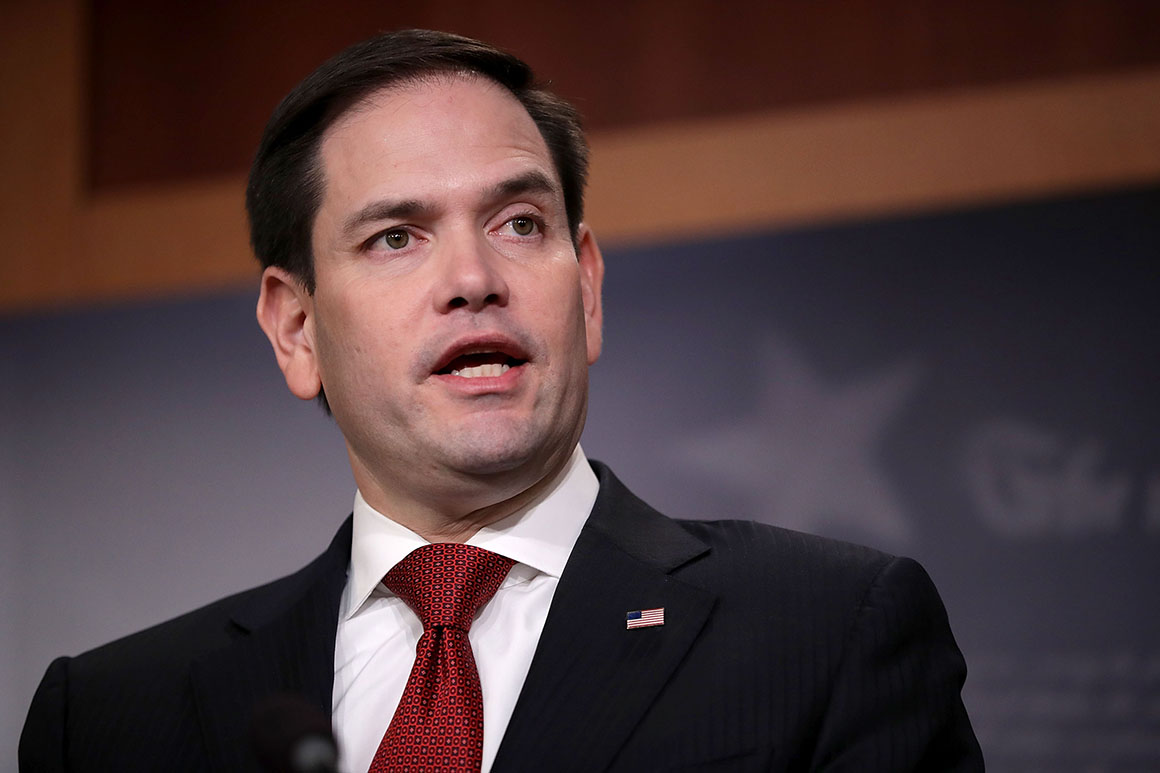 Marco Rubio’s political fortunes have gyrated frequently during his 10 years in national politics. But the coronavirus outbreak may have brought the Florida GOP senator to his most critical moment yet.

As chairman of the usually sleepy Small Business Committee, Rubio has a key position in the country’s response and recovery from the pandemic. His panel’s $ 377 billion lifeline for small businesses is a linchpin of Congress’ $ 2 trillion economic rescue package, and Rubio’s efforts are winning praise from Republicans and Democrats alike even as implementation of the program remains deeply uncertain.

And his work may just be beginning: Rubio and his panel are likely to be called upon again soon as the economy craters to provide more aid and potentially improve the rescue law’s signature Paycheck Protection Program.

“We’re like Columbus sailing in the New World. We think we found India, but it’s something else,” Rubio said in a 25-minute phone interview about how he and the rest of Congress will respond to cascading job losses and mounting infections. “We don’t know what it is that happens next.”

The same perhaps can be said for the 48-year-old Rubio, who is approaching his own crossroads as President Donald Trump runs for reelection this fall. In the span of a decade, he’s gone from tea party rising star to immigration deal-cutter and top-tier presidential contender to foot soldier in Trump’s Republican Party.

Now, Rubio’s emergence as a leading responder to the outbreak of the novel coronavirus is fueling talk among his colleagues that he, like a handful of prominent Senate Republicans, is keeping an eye on where his party goes in 2024, when Trump is no longer the GOP’s standard-bearer.

“Sen. Rubio certainly has his ambition. There’s no question about that,” said Maryland Sen. Ben Cardin, the top Democrat on the Small Business Committee. “But I think his motivation on the small business was genuine to the problems of businesses in his community, around the country.”

“I hope he decides to stay in the Senate for the rest of his political career,” added Sen. John Cornyn (R-Texas). “But who knows? He may decide to make another run for president.”

It’s a question Rubio addresses openly. Yet the conservative Cuban-American who once vowed to quit the Senate after one term seems to finally be enjoying his time on Capitol Hill. He said his second term “has been much more fruitful and fulfilling than my first,” particularly as his influence increases as a committee chairman in the Senate majority.

The coronavirus crisis has drawn out hints of what may be a crowded Senate Republican field aspiring to follow Trump.

In addition to 2016 contenders like Rubio and Sen. Ted Cruz of Texas, who has said he would consider another run, there’s Arkansas Sen. Tom Cotton, who has been praised by conservatives for warning about the virus as early as January. Sen. Josh Hawley of Missouri embraced Trump’s conservative populism and was a leading advocate for direct payments to Americans in the rescue package. And Sen. Rick Scott of Florida has been vocal in his attacks on China and the World Health Organization amid the spread of Covid-19, the disease caused by the novel coronavirus. 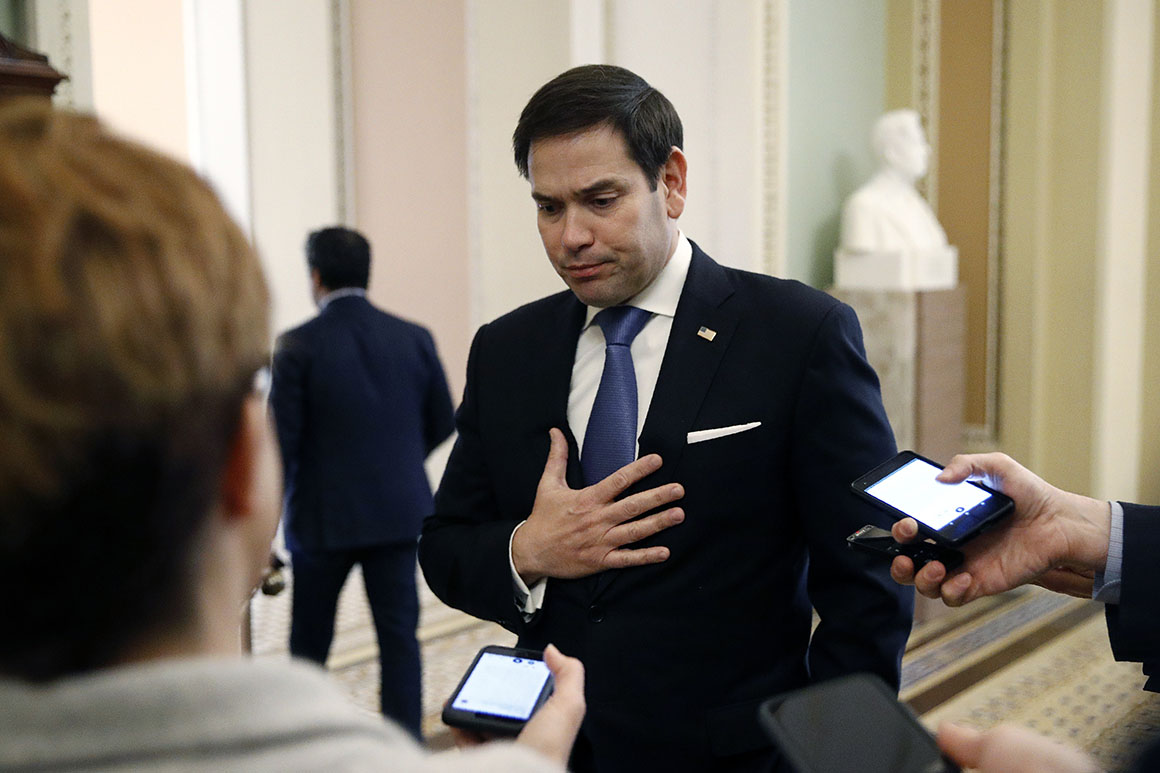 Rubio has become less overt in his pursuit of the White House. He once charted out his political future step by step: from state legislator to insurgent senator to president.

But after losing to Trump and running for reelection to the Senate in 2016, he said he’s better than he "used to be at sort of living in the moment and sort of dealing with what’s before" him.

What was in front of him in mid-March was what he saw as a flawed “Phase Two” coronavirus-response bill from the House that put too much of the onus on small businesses to provide paid leave to workers, despite Democrats wanting something even more ambitious. As he and Sens. Susan Collins (R-Maine) and Lamar Alexander (R-Tenn.) pored over the legislation during a mid-March weekend, Rubio and his colleagues decided the Senate would need to stay in session and produce its own sweeping response to the virus.

Rubio said his committee began drafting small business language in February, though it had no concept then of the scale of its mission. Still, he credits that groundwork with allowing the Senate to get its bill together quickly enough to pass it in the teeth of the crisis the following month.

The small business initiative got off to an uneven start, however, as some banks struggled to offer loans under guidelines that were rushed out by the Treasury Department. But Congress is already beginning to plan its next coronavirus legislation, and Rubio will once again play a leading role. Trump tweeted Saturday that he will "immediately ask Congress for more money to support small businesses" if funding runs out.

A former state house speaker, Rubio cultivated the reputation of a policy wonk by spending years developing a legislative portfolio before running for president only to see Trump’s slash-and-burn style sideline him in 2016. Still, there are some similarities: Each man runs his own Twitter account and dishes out media criticism readily — though Rubio’s come with a side of Bible verses.

Rubio has largely shied away from conflict with Trump over the past four years after trading school-yard insults with him on the campaign trail. Rubio has mostly backed the president’s agenda, though he opposed Trump’s national emergency to fund a southern border wall and voted for sanctions against Russia that Trump had resisted. At the same time, he’s not among the senators on Trump’s speed dial or those constantly jockeying to be in the president’s good graces.

Whether a Republican can rise in the coming years without enthusiastically embracing Trump or Trumpism may determine Rubio’s future in the party.

For now, amid the coronavirus crisis, Rubio finds himself in a potent spot in part because of his deferential attitude to more senior senators. When former Foreign Relations Chairman Bob Corker (R-Tenn.) announced his plans to retire in 2018, Rubio quickly endorsed Sen. Jim Risch (R-Idaho) to lead the influential panel rather than launch a potentially bitter intraparty challenge. Instead, he took the Small Business Committee, a relative backwater in the Senate.

And though that’s a panel generally free of the rancor that defines the polarized Senate, even there Rubio has flashed his brand of sharp-elbowed politics. He postponed what should have been a popular bipartisan small business bill in 2019 after Democrats resisted deregulation efforts.

“There was a real impasse between Chairman Rubio and ranking member Cardin,” said Sen. Chris Coons (D-Del.), a committee member who also has worked with Rubio on the Foreign Relations Committee. “That ground us to a halt.”

Moreover, Rubio is not exactly a Senate deal-maker by default. He’s stayed away from any sort of comprehensive immigration reform push since the 2013 bill he co-wrote passed the Senate only to die in the House. It simply doesn’t work, he’s warned his colleagues.

“Gang of Eight was pre-Trump. I … don’t think that he’s going to be in the lead on proposing comprehensive immigration reform,” said Sen. Mazie Hirono (D-Hawaii), who has teamed up with Rubio on issues like saving coral reefs.

Rubio also occasionally deployed more hard-line tactics in the Senate, like when he and Cotton used procedural tools in 2015 to push for tough amendment votes on a high-profile bill allowing Congress to weigh in on a nuclear deal with Iran.

But the novel coronavirus has brought out a more sober side of the onetime tea party upstart. Rubio was one of the first senators to publicly acknowledge the chamber needed to stay in Washington until it passed a rescue package because coming back might not be an option any time soon.

“We really don’t have time to argue about this, we gotta act because we don’t know how much longer we can meet,” Rubio recalled thinking. “We all realized that we were one outbreak from the Senate closing down and not being able to pass this bill.”

Maisie Smith: Strictly 2020 star crashes on the floor after training with Gorka Marquez

BySharing a picture of his post workout meal, he wrote, in view of his 531,000 followers: “Dinner post 8h dancing. Spanish chicken and chorizo...
Read more

ByBy Dan Goldberg and Alice Miranda Ollstein “These numbers will not change unless we change,” DeWine said Tuesday. “By more of us wearing masks, by...
Read more