Marco Rubio zeroes in on Russia — not Obama 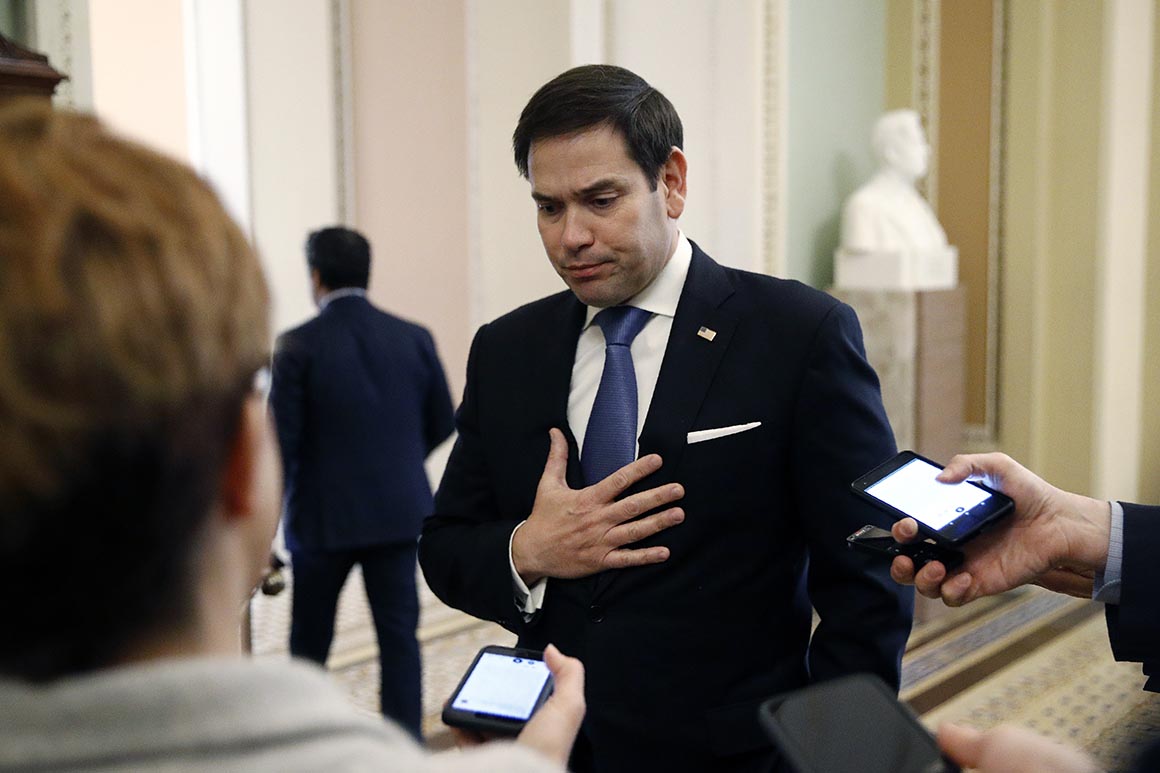 Johnson’s decision came after the FBI’s foreign influence task force briefed committee aides on Telizhenko, and after an all-senators classified briefing erupted into a combative war of words among senators who raised concerns about the Senate’s pursuit of the Biden allegations. Senators’ questions, directed toward top U.S. intelligence officials, focused on whether Telizhenko was taking part in a Russian disinformation campaign, POLITICO previously reported.

Last week, Johnson’s committee voted on party lines to authorize the first subpoena as part of the investigation. Johnson has sought to quell concerns about the information making its way to the committee, maintaining that he and his aides are carefully vetting both the documents and the sources.

Most of the Senate Republican Conference seems to support Johnson’s efforts, and the Wisconsin Republican has said he plans to release an interim report on the probe over the summer. In recent days, Trump’s allies in the Senate — including McConnell — have more fully embraced many of the theories driving Trump’s desire for revenge against his political foes, most notably the Obama administration over its handling of the initial Russia investigation.

Senate Judiciary Committee Chairman Lindsey Graham (R-S.C.) announced last week that his panel will conduct a wide-ranging investigation into the origins of the Russia probe — one that is expected to ensnare several high-ranking Obama administration officials, and is likely to lead to several subpoenas. Trump and his allies have been calling for such actions, arguing that Obama officials illegally targeted the Trump campaign and the president’s associates.

Rubio has called that probe a “valid area of inquiry” given the documented abuses of the surveillance courts. But he has declined to endorse Trump’s “Obamagate” claims, which include the allegation that the former president himself was involved in an illegal effort to undermine the incoming Trump administration, of which there is no evidence. And in 2017, Rubio pushed back against Trump’s unsupported claim that Obama had Trump Tower “wiretapped” during the 2016 campaign. Earlier, he criticized Trump for using hacked materials from WikiLeaks and encouraging the release of Hillary Clinton’s emails.

Throughout Trump’s presidency, Rubio — who was memorably defeated by Trump in 2016 — has been careful to not directly criticize him, even as he has chosen not to cozy up to him.

But his posture could soon make him a target of Trump or his allies. Like Burr, Rubio is viewed by Democrats and Republicans alike as a fair actor on intelligence issues. And it was often that persona that got Burr in trouble with Trumpworld — most notably, his decision to issue a subpoena to the president’s eldest son, Donald Trump Jr.

Our must-read briefing on what’s hot, crazy or shady about politics in the Sunshine State.

The committee is also expected to soon release the fifth and final installment of its yearslong review of Russia’s interference in the 2016 election. That report will focus on the counterintelligence nature of the initial federal investigation, including allegations of coordination between the Trump campaign and the Russian government.

Rubio’s warnings about election interference come as some suspect that it is happening in real time. Russia reportedly tried to hack Burisma, an indication that it was looking for derogatory information about the Bidens. Warner has said Johnson should be careful of “potentially viewing manipulated Ukrainian information.”

In addition, just last week, Andrii Derkach, a Ukrainian parliamentarian who has met with Trump’s personal attorney Rudy Giuliani, released recordings of Biden’s phone calls with Ukraine’s former president, Petro Poroshenko. Derkach has long had ties to Russia and, like Telizhenko, has pushed unsupported claims of Ukrainian interference in the 2016 U.S. election. Trump Jr. amplified the recordings on social media.

Both Rubio and Warner pointed to that release as further evidence that Moscow again is seeking to interfere in American elections. Warner said it showed that “there’s absolutely good reason to be concerned,” while Rubio warned that it could be the first of many efforts in a long, grueling presidential campaign.

“I think as a society we should anticipate that that’s the new normal for the time to come,” Rubio said. “And we should view everything with massive grains of salt about the sourcing.”