Mark Meadows finds it’s not so easy being chief 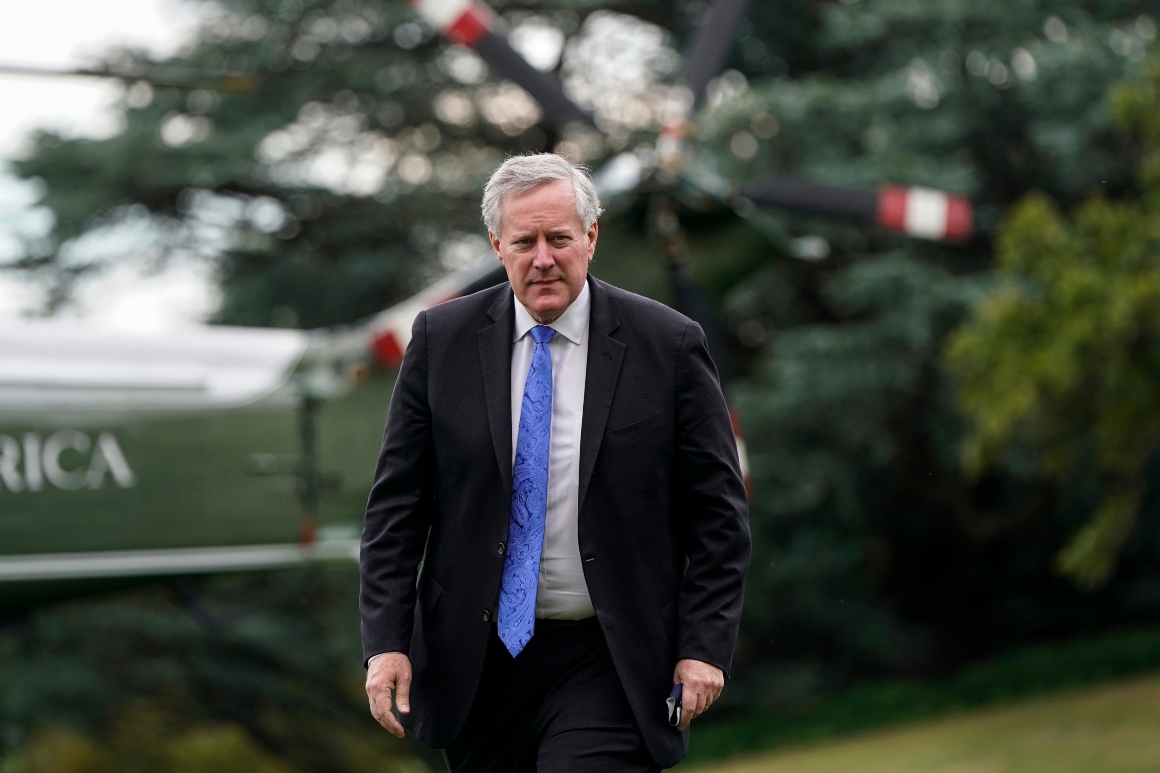 While he has brought in a handful of staffers loyal to him in the legislative affairs, communications and press offices, Meadows has yet to establish a strong power base in a White House known for backbiting — and he has not been able to execute on many conservative priorities, according to interviews with a dozen current and former senior administration officials and Republicans close to the White House. And while Baker has boasted of masterminding the 1984 drubbing of Walter Mondale “right out of the chief of staff’s office,” Meadows’ boss is currently down nearly 10 points in national polls and looking increasingly doomed in November.

Trump and Republicans have pushed to roll back Medicaid for years. But now, as more people seek government-run health assistance due to the coronavirus pandemic, those plans have hit a brick wall.

“It should not surprise anyone that Meadows is having an almost impossible time because it is mission impossible being Trump’s chief of staff,” said Chris Whipple, an author who has written extensively about White House chiefs of staff and whose upcoming book is The Spymasters: How the CIA Directors Shape History and the Future.

“Look at what has happened on Meadows’ watch: the walk to Lafayette Square, the complete mishandling of the Covid-19 crisis, the defense of the Confederate flag and the botched handling of the intelligence on the Russian bounties on U.S. soldiers. We could go on and on. It has been one of the worst stretches of the Trump presidency,” Whipple added. “He took the job, so he owns it. That was his first big mistake.”

Several administration officials, Republicans close to the White House and conservatives have been underwhelmed at the Meadows tenure so far.

“They all say they will become the chief of staff, but they all become the chief to the president,” said one senior administration official assessing Meadows alongside Trump’s former chiefs, Reince Priebus, Gen. John Kelly and Mick Mulvaney.

As co-founder of the House Freedom Caucus, Meadows was a genial presence on Capitol Hill known for maintaining friendships with Democrats and having astute political instincts even as he torpedoed their plans. That was part of the draw of joining the White House in an election year — to put those talents to use and ensure his friend and ally stayed in power. Now, he’s finding his people skills sorely tested on the opposite end of Pennsylvania Avenue, as he deals with the millions of small details of running the White House and making the move from principal to staffer.

“Is it harder than being a popular member of Congress? Absolutely,” said a second senior administration official.

Meadows and his allies hope this summer marks a turning point as he takes a larger role in negotiating the next stimulus package on Capitol Hill, alongside Treasury Secretary Steven Mnuchin. Meadows has spent the last few months courting and building a stronger relationship with Senate Minority Leader Chuck Schumer with the hope he can act as a liaison to the Senate. Meanwhile, conservatives on the Hill hope Meadows can balance out Mnuchin’s negotiating style, which they feel has ceded too much ground to the Democrats.

As he’s settled into his corner office in the West Wing, Meadows has also started to appear on Fox News more regularly and gaggle with reporters on Air Force One and in the White House driveway, warming to the more public-facing role that the president has urged him to take, said the second senior administration official. Meadows did not respond to a request for comment.

For the rest of the first term, Meadows intends to focus on efforts to revive the economy, lower prescription drugs and expand access to 5G broadband, according to two senior officials.

Those priorities could be hard to achieve if the White House and country remain swamped by the coronavirus, which has killed more than 134,000 Americans, according to the latest data from the Centers for Disease Control and Prevention. Several White House aides — Meadows among them — seem to want to will away the virus, even as infections spike across Sun Belt states like Arizona, Florida, North Carolina and Texas that the president needs to win in November.