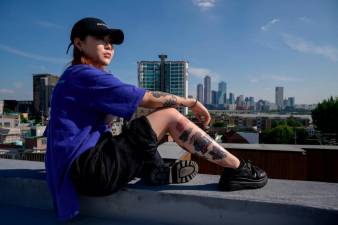 SOUTH Korean tattooist Doy counts Hollywood superstar Brad Pitt and members of K-Pop band EXO among his celebrity clients, but his delicate, detailed designs could land him in prison.

Now he is leading a campaign for the abolition of a law that reflects tattoos’ long-marginalised status in South Korea, where they were once associated almost exclusively with organised crime.

While tattooing itself is not illegal, it is classed as a medical procedure and may only be carried out by a fully qualified doctor — with the law setting a minimum two-year prison sentence for violators, although judges can impose lighter penalties.

But artists say the law has failed to keep pace, as tattoos have become more mainstream in recent years, championed by K-pop stars, athletes and others with powerful fan bases.

Doy’s career illustrates the contradictions: One of the most prominent tattoo artists in the country, he has nearly 500,000 followers on Instagram.

He declines to say what he inked Pitt with last year, citing client confidentiality, but is known at home and abroad for his unique designs – from a bird to croissants to a jumping gymnast – and intricate use of colour.

Even so, there is no sign on his studio in central Seoul.

“On your way back home after tattooing Brad Pitt, there are no words to describe how proud you feel,“ the 40-year-old told AFP.

“But from the moment you arrive at Incheon International Airport, you worry about the tattoo tools in your bag being found.”

Doy, whose real name is Kim Do-yoon, says the situation leaves the country’s 20,000-odd tattooists vulnerable to prosecution and random raids – as well as blackmail by malicious or dissatisfied clients.

Earlier this year, he established the country’s first tattoo artists’ union and will soon ask the Constitutional Court to legalise tattooing by non-doctors.

But after media reports featuring his union activities, someone – who has not been publicly identified — filed a criminal complaint and Doy now faces a police inquiry.

It “feels crappy” to be investigated, he said, but felt he “had to do something”.

“If you leave things as they are, nothing will change.”

According to the Korea Tattoo Association – a separate organisation to Doy’s union – at least a million people have inked their skin in the country and the illicit but growing industry is worth about 200 billion won (US$ 170 million) a year.

It says another 200,000 beauticians who apply permanent makeup to their clients using tattooing techniques also come under the current rules.

But despite their newfound popularity, tattoos can still carry negative connotations, especially at workplaces in South Korea, with public broadcasters often blurring them out.

Getting inked by non-doctors could lead to “a serious infection or allergic reactions”, an official at the Korea Medical Association said.

Doy says his union plans to come up with health guidelines for tattooists, in collaboration with medical professionals who support their cause.

He has tattooed at least 10,000 people in his 14-year career, but says he had never faced prosecution or blackmail until July.

Other tattooists, though, had lost their income after being convicted, and he knows of artists who have committed suicide as a result.

“This is very devastating,“ he said. “In a way, they lost their lives because they were painting.”

Some have come to terms with being repeat offenders: Kim Goang-seok, 54, says that when he first went into tattooing 25 years ago, “80 percent of my clients were gangsters, and I would repeatedly ink big tigers and dragons”.

He has been convicted three times for inking and was once jailed for eight months, but says he will never stop.

“I’ve always felt uneasy about doing something illegal, and I still feel uneasy,“ said Kim, who has been tattooing at his “secret”, signless studio in the southern city of Ulsan for more than two decades.

“But this is the only thing that I’m good at. I accepted that when I was convicted the first time.”- AFP