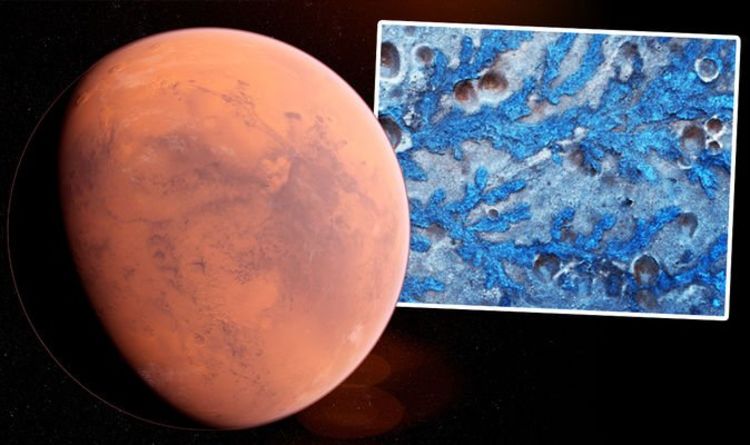 But these are not signs of alien fauna on the Red Planet.

Instead, ESA speculates these are evidence of ancient water channels cutting across the crater billions of years ago.

Before Mars lost its magnetosphere and became the barren desert it is today, it is believed to have resembled a young Earth with running surface waters.

ESA said: “In the centre of the image are dendric structures which look like the veins on oak leaves.

“This is because the channels were filled with harder material – possibly lava – and over time the softer rocks surrounding these branching channels have been eroded, leaving an inverted imprint of this ancient river system.”

Headlines were made last year when the remains of Captain Matthew Flinders, the Royal Navy explorer who led the first circumnavigation of Australia, were...
Read more
Science

Michelle Starr Aurora - the dancing glow of ionised particles in Earth's upper atmosphere - is not unique to our planet. The phenomenon has been spotted...
Read more
Science

Peter Dockrill Australia's horrific bushfires from late 2019 to early 2020 were like nothing the nation had ever seen. Multiple megafires blazed across the land,...
Read more
Science

Commercial fishers captured a catshark around the waters of Sardinia, but were stunned by the condition of the beast. Marine biologists noted that the...
Read more