Masked Singer on Fox: Who is Banana? All the predictions and clues so far 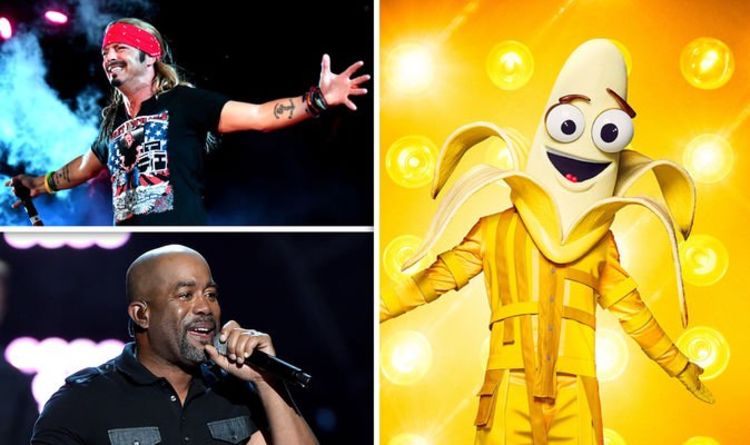 Who is Banana in The Masked Singer?

The Masked Singer has returned for season three on Fox as 18 celebrities put on full costumes and perform on the stage.

Among the line-up of the latest series is the Banana who has performed once so far.

In their first appearance on the show, the character sung A Little Less Conversation by Elvis Presley.

Their clue package also gave a number of hints about who they could be.

In the video there was a cowboy hat, a blowfish and a blue dog collar.

The character also revealed how much he loves to party as well as how he enjoys making people smile.

This led some of the panel to believe he was a comedian, throwing out guesses like Bill Engvall, Ed Helms and Darius Rucker.

Engvall was guessed as he was part of the Blue Collar Comedy Tour, while Rucker is the lead singer of Hootie and the Blowfish.

Posting on Twitter, user @dayjete2 wrote: “Banana is Bret Michaels, I can tell by the walk and dancing.”

“I think Banana is Brett Michaels. He has a line of pet products. The blue collar was just that, a dog collar,” added @IdentityMiss.

Another guess about who he could be is comedian ‘Weird Al’ Yankovic who is known for performing parody songs.

Other names referenced so far in relation to the character include Billy Ray Cyrus, Jeff Foxworthy and Bo Burnham.

In his group, he will be performing alongside Kitty, Mouse, Taco and Frog in the latest episode of the show.

This comes after Elephant was unmasked in their first performance as professional skateboarder Tony Hawk.

Group B are all competing for three spots in the final nine later of the competition.

They will be performing in two more episodes before it will be Group C’s turn to take to the stage.

The Masked Singer airs on Fox on Wednesdays in the US.