Mayors look to each other, not Trump, on coronavirus response

Mayors representing some of the country’s emerging hot spots for the coronavirus are leaning on one another — not the federal government — as they struggle to prevent their cities from becoming the next New York.

Vice President Mike Pence said the Trump administration has made an effort “to be particularly responsive to” areas where a growth in cases has been identified, such as Chicago, Detroit, Denver and cities in New York, New Jersey, Connecticut and Louisiana.

“There’s a series of other cities … that we’ve been watching very carefully,” Pence said Wednesday at the White House. “And while we’re beginning to see some encouraging news, we want health care workers in those communities to know for certain that that we’re going to move resources into those areas where we see significant outbreak.”

Some city leaders aren’t holding their breath. Citing the legacy of Hurricane Katrina, Atlanta Mayor Keisha Lance Bottoms has told her staff, “God bless the child who’s got his own.”

“We have taken a lot of steps not knowing what the federal government would do but assuming we would have to go it alone,” she told POLITICO. “Hopefully all of the things that they claim will be coming to cities and to our communities will come to pass. But my posture has been we’ll assume that nothing is coming and that we will have to do this in the way that’s appropriate for our community.”

Instead, Bottoms has sought support from her counterparts in major cities grappling with similar outbreaks. While Atlanta has been a leader on issues like hazard pay for frontline workers, Bottoms said, it’s also followed policies from other cities.

She said she modeled Atlanta’s stay-at-home order after San Francisco Mayor London Breed’s, took messaging cues from Birmingham, Ala., Mayor Randall Woodfin, plans to roll out a grant program for residents similar to what Mayor Melvin Carter has done in St. Paul, Minn., and spoke to Los Angeles Mayor Eric Garcetti. Bottoms is also on a text thread with at least 10 other mayors.

“For as many mayors as I’ve reached out to for guidance and assistance, I’ve had as many reach out to me,” she said.

Fellow mayors are pioneering approaches to other common dilemmas as cases of Covid-19, the disease caused by the unique coronavirus, have mounted.

New Orleans, where more than 5,000 cases have been confirmed and 208 have people have died, released a set of guidelines this week on coroners, funeral homes and burials.

“The Covid-19 outbreak has created a tragedy within a tragedy: Compromising the way our residents prepare their deceased love ones to be laid to rest, and share in their grief the way we’re accustomed to. And it won’t get any easier,” Mayor LaToya Cantrell said in a statement Tuesday.

Beginning at midnight Friday, customers entering Los Angeles grocery stores, pharmacies, hotels, taxis and ride-hailing vehicles will be required to wear a cloth mask. They can be refused service if they fail to comply.

The same order, which Garcetti announced on Tuesday, also requires essential business employees to wear face coverings, and employers must cover the costs. 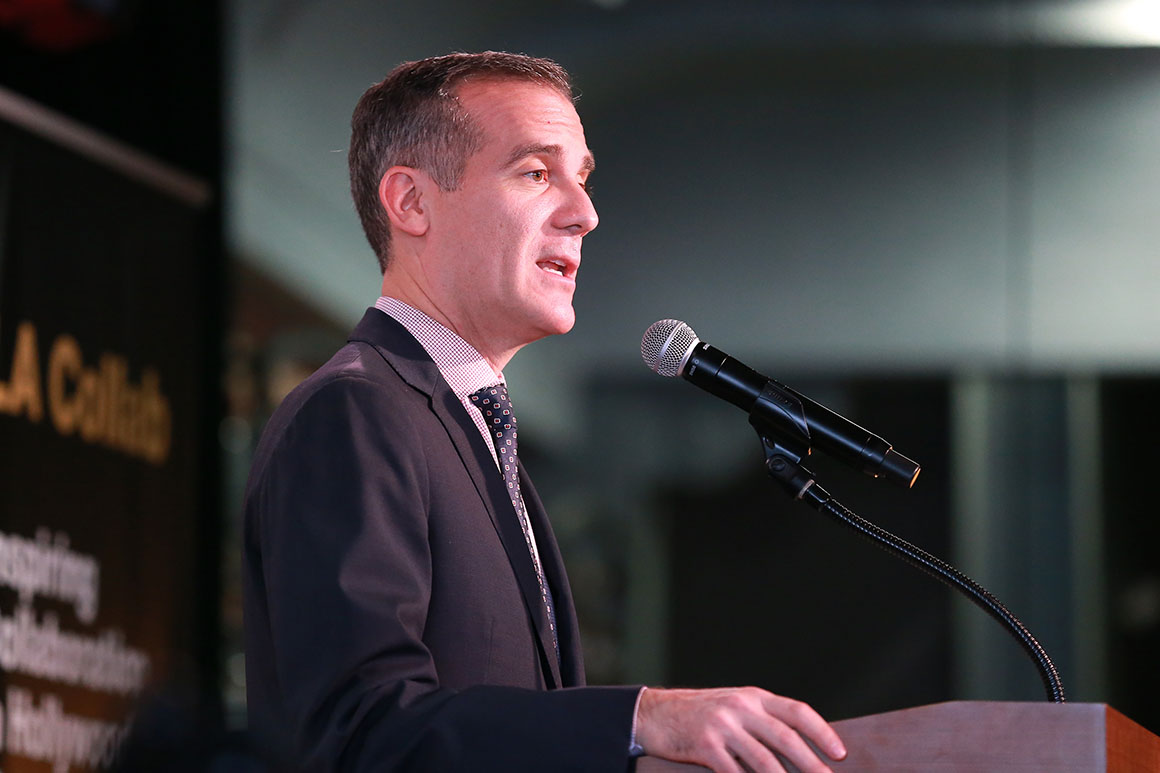 “We need to protect every worker on the front lines of this crisis,” Garcetti said. “Each one of us is a first responder in this emergency. Every employer should keep employees safe, and so should Angelenos patronizing these businesses.”

Local leaders have developed ways to share these best practices among themselves. Mayor Bryan Barnett of Rochester Hills, Mich., president of the U.S. Conference of Mayors, hosts weekly calls with mayors, as do Bloomberg Philanthropies and Harvard University.

“It all started with the mayor of Seattle. She was on our first call,” said Tom Cochran, CEO and executive director of the U.S. Conference of Mayors. “The mayor of Seattle is saying, ‘Let me tell you what I did wrong and what I should’ve done, and when this hits you, you should do the following.’ You’ve got this incredible group of people that are living with this, and they just wanna ask how the other mayors are doing it.”

Barnett, Chicago Mayor Lori Lightfoot and Deborah Birx, the White House coronavirus response coordinator, will address hundreds of mayors and participate in a Q&A on a conference call Friday morning.

The burst of local collaboration is, in part, a response to the power vacuum left by the federal government. President Donald Trump and his administration have refused to issue nationwide stay-at-home orders and insisted that states and local governments should take the lead on the pandemic response.

At the same time, Trump and members of the White House Coronavirus Task Force claim to have marshaled an unprecedented effort to channel medical supplies to the areas that need them most. But some leaders of high-risk cities say they still do not have some of the equipment they need in the event of a surge in cases.

At the task force’s daily news briefing Wednesday night, Pence highlighted Philadelphia as “an area of particular concern” and said he’d assured Pennsylvania’s governor, Tom Wolf, “that we are going to continue to flow resources and support to that community.”

But Philadelphia Managing Director Brian Abernathy told POLITICO that while the city is “pretty comfortable” with the number of available hospital beds, it continues to struggle to obtain N95 masks. A lack of surgical gowns is also becoming an issue, Abernathy said.

“All of those items to keep our health care workers and first responders safe are limited,” he said. “Our health care systems are rationing and doing what they can to decrease demand to still keep their workers safe.”

The House Oversight Committee released a document Wednesday from the Department of Health and Human Services showing insufficient distribution of PPE and medical supplies to states from the national stockpile.

“The document … shows that the federal government has distributed just a fraction of the personal protective equipment and critical medical supplies that our hospitals and medical first responders urgently need,” Rep. Carolyn Maloney (D-N.Y.), who chairs the committee, said in a statement. “Now that the national stockpile has been depleted of critical equipment, it appears that the administration is leaving states to fend for themselves, to scour the open market for these scarce supplies, and to compete with each other and federal agencies in a chaotic, free-for-all bidding war.”

It’s a criticism that has dogged the administration since the virus began to spiral out of control last month. The U.S. is now the world leader in reported Covid-19 infections by a wide margin, with hundreds of thousands more cases than Spain, Italy and Germany. New York City is the epicenter of the national outbreak, with more than 5,000 deaths, although the rate of hospitalizations has begun to stabilize, suggesting the outbreak may be peaking there.

Officials in some cities say watching New York has added urgency to their response — and hopefully helped avoid a similar outcome.

Lightfoot told reporters Thursday that she has personally been in contact with New York Mayor Bill de Blasio and engaged with other mayors.

“We have strong relationships across the country,” she said, acknowledging Los Angeles, San Francisco, Seattle and King County, Wash. “We’ve been trying to take advantage of the lessons learned from those jurisdictions.”

Philadelphia closed nonessential businesses the same day New York did, which Abernathy said put them “a little bit out front of the spread.”

“Frankly, we may not have been if we hadn’t been watching New York,” he added.

Shia Kapos and Renuka Rayasam contributed to this report.
————

ByRelated TopicsUS election 2020With 12 days remaining, everything could change depending on how the final debate goes. Read our alternative guide to what to...
Read more