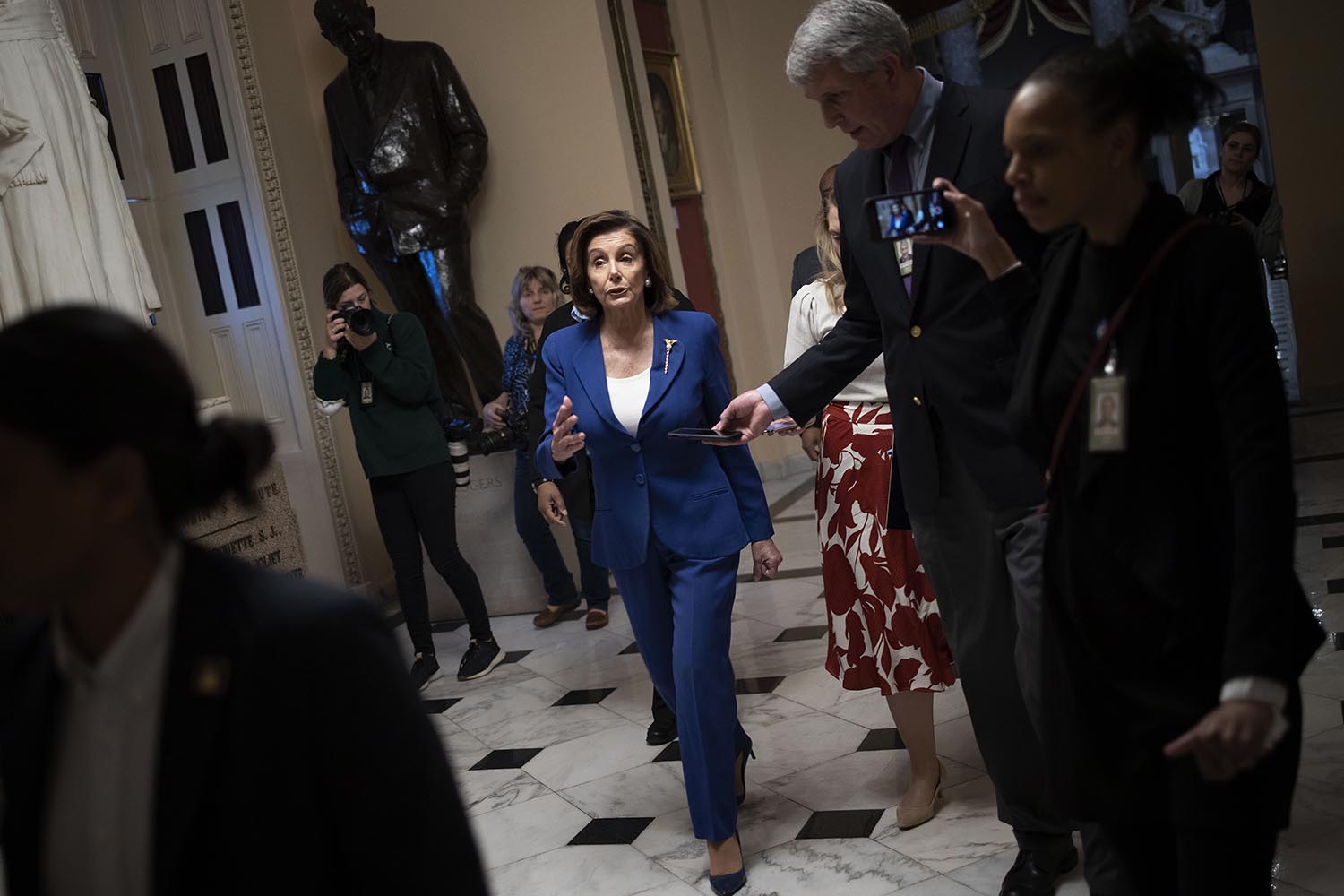 Mitch McConnell and Nancy Pelosi are on another coronavirus collision course.

"I’m not going to allow this to be an opportunity for the Democrats to achieve unrelated policy items they wouldn’t otherwise be able to pass,” McConnell said on Hugh Hewitt’s radio program on Tuesday morning.

House Democrats indicated on Monday they are already beginning to work on their legislation. But McConnell said it could be days, if not weeks, before his majority has assessed what is needed in addition to last week’s $ 2 trillion stimulus bill.

Republicans have criticized Democrats’ plans in the House, with Sen. Pat Toomey (R-Pa.) declaring this week that if another bill is needed “it should not be the vehicle for Speaker Pelosi’s partisan, parochial wish list,” specifically bashing any attempt to restore state and local tax deductions for wealthy states. But in an apparent prebuttal to McConnell, Pelosi said Tuesday on “Morning Joe” that she hears “people saying ‘they’re doing this wish list.’ And that isn’t so.”

“We have agreed in our negotiations that everything that we’re doing is specific to the coronavirus challenge,” Pelosi said, ticking off water and surface transportation infrastructure and broadband for people working from home. “We may have our differences, but we have to find our common ground.”

Still, McConnell and Pelosi have never had a particularly warm relationship, with Pelosi dubbing McConnell a "rogue leader" earlier this year and McConnell blaming her for delaying last week’s legislation and attempting to be speaker of the Senate.

There’s still residual bad feelings from the breakneck effort to pass the $ 2 trillion emergency bill. Pelosi wanted top congressional leaders to negotiate that legislation, but McConnell rebuffed her in a phone call. Pelosi returned to Washington to push back against the GOP’s attempts to shape the legislation without her.

Now, Pelosi can use the upcoming Phase 4 bill to reassert Democrats’ priorities on sick leave and new stimulus spending programs.

“Imagine being concerned about being sick and just not even having any resources to address your family’s needs. We have important work to do. Again, three bills, strongly bipartisan,” she said. “And what we do next will be bipartisan as well."

McConnell said he would view any House bill in the lens of Ronald “Reagan’s suggestion [at how] we look at the Russians: Trust but verify.”

The early positioning from the two leaders indicates that the next phase of relief legislation for the novel coronavirus might follow a more traditional path of divided government than the quick effort to pass last week’s emergency package. The next stage of congressional response could instead be a laborious, weekslong public fight between Democrats and Republicans as Congress lies in recess until at least April 20 and possibly longer.

In addition, President Donald Trump and his allies may revive an effort to cut payroll taxes this year in the next phase, according to congressional aides, a curveball that could inflame tensions in both parties. Trump said on Twitter that he watched Pelosi’s appearance on “Morning Joe” to see “what moves she was planning to further hurt our Country. Actually, other than her usual complaining that I’m a terrible person, she wasn’t bad.”

But Trump also seemed warm to some of Pelosi’s plans a few a minutes later, tweeting that with low interest rates, Congress should do a "VERY BIG & BOLD" $ 2 trillion infrastructure bill. So far congressional Republicans have been cool to that idea.

To Democrats in both the House and Senate, there’s little question of whether there will be more legislation needed eventually, especially as the outbreak continues to spread and hobble sectors of the economy, forcing millions onto unemployment rolls and shuttering businesses.

“There’s clearly going to probably be a fourth and maybe a fifth before we’re finished,” Sen. Ben Cardin (D-Md.) said.

Rep. Josh Gottheimer (D-N.J.) argued that the first tranches of emergency aid were simply to stop the bleeding in the economy, not to spur recovery. The next bill, he said, needs to invest in infrastructure to actually help people into jobs. “The first bills, they were more rescue and relief, than stimulus,” Gottheimer said.

But McConnell was noncommittal when asked by Hewitt about the prospects of another package. He said that the Treasury Department needs to cut checks to Americans and that Congress needs to assess what the $ 2 trillion just injected into the economy does for unemployed workers and small businesses.

“This bill was only signed into law last Friday. So it’s only been law for about four days and the speaker is already talking about another bill,” McConnell said. “She hasn’t suggested the House would even come back into session until the 20th of April, and I’ve said the same thing, so let’s see how things are going and respond accordingly.”

McConnell did make a commitment on one thing, however. When asked by Hewitt whether the Senate would resume confirming Trump’s judicial nominees, he replied: "My motto for the rest of the year is to leave no vacancy behind.”